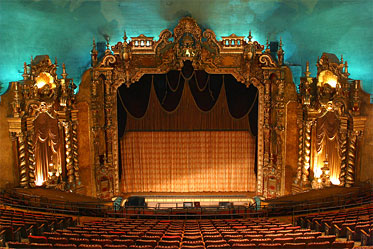 HUNTINGTON, WV — Robert Edmunds, a communications professor at Marshall University, had founded the Huntington Theatre Organ Project in an effort to help galvanize interest of local business in preservation and restoration of the 1928 Thomas Lamb Keith-Albee Theatre.

The Project has nearly completed installation of a 1927 Wurlitzer EX pipe organ into the Keith that was originally built for the Granada Theatre in Bluefield, WV. The Keith’s original organ (Wurlitzer Model 240 that was used for silent movies) was sold in the 1950s and is own by a private collector.

Commenting upon the Keith, Edmunds praised the theater as a “palace of splendor.” Edmunds will be playing Christmas selections during intermission of “The Incredibles” this Saturday. In fact, the theater now has the balcony with comfortable loge seats and stadium similar seating open on every weekend.

Although the Keith continues showing first run movies, the opening of a stadium seating multiplex a block away has preservationists worried. For now, the owners of the Keith have negotiated an arrangement in which the new theater and the Keith, Camelot, and Cinema (all on Fourth Avenue) split new films 50-50.

Edmunds would like to see the Keith restored for use as a performing arts center for the Marshall Artists Series and Huntington Symphony Orchestra.

For the full story, read this report from the Herald-Dispatch.

For a link to interior photos of the Keith-Albee, click here.