Balboa’s Birthday Bash Was a Blast! 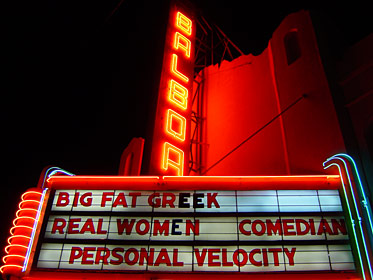 SAN FRANCISCO, CA — In anticipation of the big day, the Balboa staff worked hard to clean and get ready for our 78th Balboa Birthday Bash.

With daily construction happening around the theater restoration and handicap upgrades, there was quite a crowd in the lobby and auditoriums each day. Several took on the delicate project of washing the etched glass of our light fixtures while Romero Glass Studios in Oakland was creating replacements for the broken and missing pieces.

It was late Wednesday when the popcorn machine decided to stop. All the little tricks we know were attempted but it just wouldn’t heat up. Without heat you can’t pop the corn. Greg from the Red Vic Theatre rushed over to see if he could add this repair to his list of successes. He worked for hours but couldn’t get the unit open, where the work needed to be done. General Manager Roger Paul called around to other theaters hoping to find a spare popper we could borrow. No luck, but the Castro Theatre offered to pop corn for us and run it over during the party.

In the morning we called various vendors about renting a unit. All they had were small ones, mostly already booked. Finally we tracked down Larry, our tech guy and Roger drove to the Musee Mechanique where, acetylene torch in hand, he finally got it opened and worked his magic. By mid afternoon, Roger was nearly overcome with exhaustion as he tightened the bolts and attached the electrodes. Elated by the crackling sound of rapidly popping kernels of corn when he triumphantly yelled “It’s Alive!” (Movie buffs just can’t resist quoting favorite films.)

Meanwhile, our slide projector with special zoom lenses couldn’t be found anywhere. A call had been put out to borrow one. All week long I traveled to various friends' homes to borrow their projectors. Long unused, each had something wrong. A visit to the Oakland Museum’s White Elephant sale (make a donation and they let you get a preview) was a disappointment. Usually overrun with Carousel projectors they only had broken ones. But they had the special lens that sells for about $150.OO and it was mine for $10.00. Finally filmmaker Judy Ehrlich came through with a working model. No timer meant we’d have to advance slides manually but better than nothing.

Advance ticket sales accounted for half of our capacity by Wednesday night. Expecting a repeat of last year’s sellout I warned newsletter readers to come early so arrivals were steady and seating went very smoothly. Though the preshow was scheduled to start at 7:00, Suzanne “Kitten on the Keys” Ramsey saw an audience ready to be entertained and she sat down at the piano early to provide a variety of songs from the 20s including a tribute to the “IT” Girl. Lantern slides from the silent era appeared on the screen. “Ladies, Please Remove Your Hats” picturing a man climbing a ladder to see over a woman’s very tall millinery; “Please Don’t Spit – Remember the Johnstown Flood,” calls for amateurs talent night acts, assurances that this theater “only plays clean pictures suitable for mothers and their children,” and promos for movies starring Chaplin, Gish, Barrymore, Pickford, Fairbanks, Bow and Keaton not to mention dozens of forgotten screen stars.

At 7:30, dressed in my tuxedo and derby, I came on our “new” stage to welcome the packed house. Gazing into the crowd it was wonderful to see how many people, largely encouraged by the Art Deco Society, had dressed up for the night. San Francisco silent movie trivia questions followed the “thank yous” and several great prizes were awarded. We made a special thanks to Erich Sommers and Bill Moulton, the geniuses behind the Balboa wonderfully painted lobby highlighting the art deco details. The appreciative audience went wild.

Ms. Ramsey was formerly introduced and returned to accompany several previews of coming attractions for action packed silent serials. She improvised like the best accompanists of the day as the films were a very last minute bonus and she’d never seen them. But the audience thought she’d played for these films many times before. More prizes were given out. Dapper in his favorite vintage suit (courtesy of The Third Hand Store at 1839 Divisadero St.), Roger told about the popcorn machine adventure.

Up next were a Felix the Cat cartoon, ASTRONOMEOWS and George Melies' A TRIP TO THE MOON accompanied by Nik Phelps on several instruments and Larry Dunlap on piano. The audience laughed and cheered.

The lights came up and James Hamilton was introduced. A magician internationally known for his classic performance style, wit and knowledge of the history of magic, he did not disappoint. Proposing a toast to the Balboa on its birthday, Hamilton poured himself a drink while the audience was startled when he let go of his champagne glass as the bubbly flowed into it, floating as if lighter than air. Next he invited two audience members up and introduced a deck of cards that had been cut". literally and diagonally. Twists, turns and amazed laughter resulted from a most unusual card effect. The finale involved making a missing Oscar statue magically appear. It was presented to our guest of honor, William Wellman Jr. This is James Hamilton’s third appearance at the Balboa and we look forward to many more.

More prizes that made celebrants happy included a season’s pass to the San Francisco Silent Film Festival (July 10-11 at the Castro), and an original photoplay edition of the novel WINGS (both courtesy of the SFSFF)). Suzanne Ramsey returned and song sheets were handed out for a song written to commemorate the 1923 opening of the Balboa’s sister theater, the Alexandria, that had closed a week earlier.

The Kitten explained, “it is playable BUT NOT singable for me unless I was a neutered Vienna Choir Boy! I can definitely play some of it cuz I think it is a cool musical artifact!” She bravely led a few audience members singing it. The unfamiliar song was a challenge for many but they did their best. A rousing reception greeted Ramsey as she led everyone singing “Happy Birthday Balboa.” I returned to the stage and someone yelled out, “Why did the Alexandria close?” I briefly discussed the problems of operating a neighborhood theater and the difficulty it presented for a large national chain unable to provide the loving care needed to give such a theater a chance. This provided a perfect segue to discuss the improvements and restoration ongoing at the Balboa.

I explained, “As walls are opened we discover original paint details and décor long thought lost. It appears that the west side of the lobby is an added false wall. A flashlight revealed some designs and several feet deep into the wall there was some kind of frame with ornamental corners. We finally found someone thin enough to climb between the walls with a flashlight and screwdriver and when he returned we found this.” I brought on to the stage a gold frame containing a carefully hand-lettered sign announcing “Free dishes for the ladies on Wednesdays and Thursdays.” The crowd loved it and someone yelled out “This is Thursday.” I couldn’t have staged that better if there was a plant in the audience. I responded, “Do you think we should give away some dishes?” A chorus of “yes” was heard. I explained that we had dishes plus silent films (from Kino Video, gift certificates from Limelight Book Store, and Balboa passes. As people got up for intermission they were asked to look under their seats where 30 prize vouchers were taped. Can you imagine the sight of over 300 people excitedly checking in hopes of winning?
“I won a Clara Bow video!”
“I got a dish!"
"Free movies!”
People were yelling out their prizes.

People flowed into the lobby and noticed that a stunning classic car was parked in front of the theater.

As everyone returned it became clear this would be a late night. Roger offered anyone who had to leave before it was finished free admission to our encore Saturday noon show. William Wellman Jr. was introduced and regaled us with fascinating stories of early Hollywood. He explained how his father, a Lafayette Flying Corps fighter pilot in World War I who was shot down by enemy fire, became a director of low-budget films. The heads of Paramount Pictures wanted to make a big budget romantic drama adventure starring Clara Bow and Wellman was suggested. The 29-year-old had made some pretty bad films like YOU NEVER KNOW WOMEN and THE BOOB but Jesse Lasky was convinced to give him a chance. There was much worry over Wellman, with his reputation for being feisty (earning him the nickname “Wild Bill”) of concern on a huge budgeted ($2 million) movie. But when they saw him directing the air combat scenes, he was given the reigns, though studio bosses were understandably nervous that he insisted his actors, Richard Arlen, Charles “Buddy” Rogers and Gary Cooper needed to learn to actually fly the planes to get realistic shots.

Wellman’s stories captivated us all but he realized it was getting late and turned over the proceedings to master composer and musician Nik Phelps. Phelps had spent weeks screening WINGS and writing music. He was up most of the previous night getting his original score just right. Before starting the showing he wanted to dedicate his score and performance to the Balboa Theatre’s oldest fan and his long-time friend, 93-year-old Dorothy Durham who had turned out to celebrate the theater’s birthday.

And then the feature started. We paid extra to bring in the best print in distribution from the east coast. It was worth it. Nearly in mint condition, it played without any problems. We expected people to start leaving around 10pm because it was a long evening. But few budged. WINGS is 2hours, 20 minutes of pure entertainment. It has action, romance, drama, comedy plus great performances. It is easy to understand why Clara Bow was so popular and we are reminded (or discover for the first time) how terrific and unfairly Rogers has been practically forgotten. The score was a perfect accompaniment. It was not a typical silent movie score filled with clichés and it brought the film to life for contemporary audiences.

At 11:20 the audience burst into applause, appreciating the beauty of both the movie and the music, realizing the stamina of the little orchestra that has just performed for so long without a break.

The lobby quickly filled as the birthday was celebrated with Birthday Cake from our neighboring Sugar Bowl Bakery and libations from Sylvester Winery and a selection of beers courtesy of Robert Meyer and Diane Boate. Wellman and the performers traded stories with audience members well past midnight.

I think it is fair to say, “A great time was had by all.”