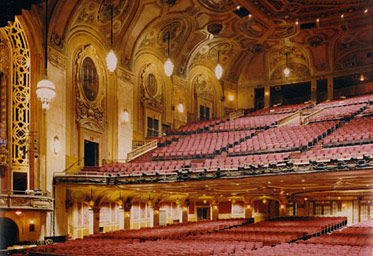 BUFFALO, NY — A fundraising goal to raise $4.1 million by May 1st has been accomplished by the Shea’s Performing Arts Center, Buffalo’s largest live performance venue, according to this report from the Buffalo News.

The theater, which opened in 1926 and seats 3183, was designed by the Chicago-based architectural firm of Rapp & Rapp. The funds will enable Shea’s to pay for the five year-old stagehouse, repair the west south and east walls and finish exterior restorations.

According to the theater’s president and chief operating officer, Anthony C.Conte, “In my opinion, it’s probably one of the most important fund-raising drives in the history of Shea’s.”

Among the projects to be done on the building’s exterior include the creation of a 26 foot-long sign reading “Wonder Theatre” for the front of the theater (which Shea’s was called when it opened), a replica of the original vertical “Shea’s Buffalo” sign, an 18 foot-tall pediment that was removed in the 30s, and restoration of the terra-cotta.

A neighboring costume store has been acquired by Shea’s and is set to be converted into the new ticket office this fall.

Love the old Shea’s buffalo, I often worked there as an usher back in the 1980’s when i was in high School. Glad to see that it will last for generations to come. I haven’t been there since leaving buffalo 20 yrs ago.

A small famliy story about opening night. apparently, my grandfather had obtained tickets to the opening night to impress my soon to be grandmother. He was not a rich person, barely spoke english, and had to borrow the clothes that he wore that night, and to further impress her, he arranged to borrow a friend’s brand new Model T Ford. Upon arriving at the main entrance to the cinema, amid the finest crowds of Buffalo’s elite, he got of the car and walked around to open the door for her. in doing so, he pulled the entire door off of its hinges, and fell over in great embarassment. In a domino effect, other parts of the car fell off, and they ended up missing the evening to arrange for a tow!

The Shea’s is a wonderful theater and is a amazing that the City of Buffalo didn’t demolish it! I took a tour last summer and it was well worth it. Radio City Music Hall’s Christmas Spectacular is there now through the end of November. Great grandfather-grandmother story, DuckLips! And you MUST return to Buffalo if it’s been 20 years as the Shea’s not only has a restored marquee, but again has the tall sign reading SHEA’S BUFFALO, vertically along the front of the building. It also has the its top facade ornamentation replaced by a local Buffalo firm. I have seen these photos on the internet!

Yesterday marked the eighty fifth anniversary of the opening of the Wonder Theater. So pleased to see ot thriving and again the cornerstone of the entertainment district as she was always meant to be. These buildings, rococo, baroque and fantastical creations dreamed up to impress, awe and invite all inside to escape the real world had such a brief life and lifespan… between radio and TV… And, though we have flashy hi tech boxes where the tech is the focus, many of these were designed for silent film… So many buildings sat idle and unusable… But, Shea’s is truly a jewel, not just for Buffalo, but for reuse, acrhcitecture and perserverence.