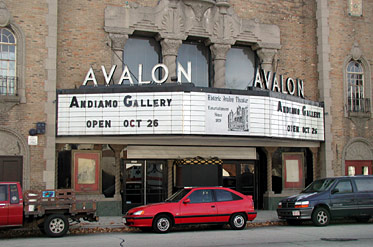 MILWAUKEE, WI — Among the ‘Top Ten Endangered Properties’ that the Wisconsin Trust for Historic Preservation notes on its 2004 list is the 1929 Avalon Theatre.

The Trust is planning a traveling photo exhibit featuring the endangered properties to increase public awareness of the sites. For more information about the list, check out this report from the Milwaukee Sentinel Online.

BryanB is kind to point out the dilemma facing the venerable AVALON in Milwaukee, but I am afraid that things do not look good. The owner, who has been refused a beer/liquor/cabaret license by the city, has now demolished the box office (no great loss) and has removed the theatre’s name sign atop the marquee, and the attraction boards now mention to call a phone number to reserve future office space. The crux of the matter hangs on parking – or the lack of it – since there is no parking lot available nearby. These days, Americans are not accustomed to walking more than a block to anywhere, and without nearby parking, there is too much danger of careless patrons making loud, disruptive behavior down sleepy side streets as they search for their cars parked in front of neighbor’s houses, and if drink were served, the patrons would be all the more boozed and un-neighborly! I feel for the theatre, but I also sympathize with the neighbors, even though I do not live in that area.

The Wisconsin Trust’s mention of the Soldiers' Home Historic District is relevant to lovers of theatres, since its most notable structure threatened with loss is the historic 1881 WARD MEMORIAL THEATRE on the 150 acres of the Veterans' Administration grounds, which was founded in 1869 as the National Home for Volunteer and Disabled Soldiers of the Civil War. This federal enclave on the border of Milwaukee is run entirely by the federal government, but they claim not to have funds to maintain or repair to again working status this unusual old theatre. It was originally lit by kerosene lanterns (!) but was largely rebuilt into the 1,000-seater with a balcony and six boxes that it is today. There is a large stage with modern lighting, a huge stained glass mural of Gen. Sherman on one wall, and even wire form hat racks under each black leather seat to hold the old high-domed military hats of generations ago. It is tucked away inside the large park-like campus with no great parking nearby and public transportation some six blocks away on their property line at National Ave., so it is not easily accessible for the public. Unless a ‘sugar daddy’ comes along, I fear that this Victorian gothic style structure with its interior sylvan murals painted on the oak woodwork-framed walls, will eventually be demolished. At one time it furnished gratis performances by celebrities traveling on the train that goes through the property towards Milwaukee, for the inmates of the domicilaries that still occupy some of the land. Today, it is idle, what with TV being the primary source of entertainment for the veterans residing there.