Not to be missed theaters 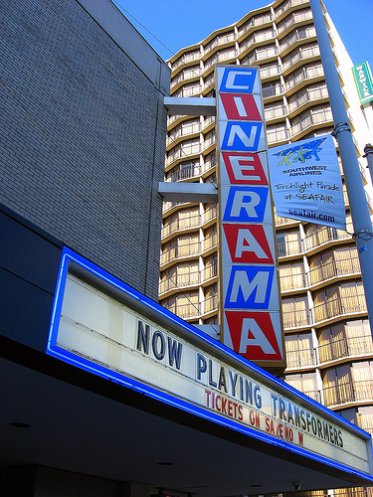 Opening up my e-mail yesterday, I came across a feature that Ross Melnick had contributed to on Forbes. It highlights some notable theaters still standing with almost all still doing first-run business. Don’t get too excited because most are the usual suspects.

When I go on trips, even if it’s just for the weekend, I always lookup the local theaters of note at my destination as well as on the way. With the next two months, a lot of us here in the Northern Hemisphere will be taking summer vacations and maybe coming near such a theater.

So I ask you, what one theater should have been included on this list? Forget about the fact that most of their choices were in major cities and that one was even a multiplex. What single-screen theater, anywhere in the world, is still showing first-run films and is worth the trip there to see it, even if you’re only remotely nearby (or worth a trip of its own if you’re really THAT HARDCORE! Oh yeah!)?

Maybe I could at least attempt to give a worthy answer. Let me first get out of my same old predictable environs of Los Angeles. I’m gonna go with the Seattle Cinerama. As one of the cinema jewels of the Pacific Northwest, it was faithfully restored less than ten years ago by Microsoft co-founder Paul Allen to its present magnificent state. With almost a thousand plush seats and both a curved and flat screen depending on the type of film shown, the theatre leaves little for even the most particular theater critic to complain about. Oh yeah, and it’s one of only three theaters in the world equipped to play 3-strip Cinerama films.

That’s my pick, but what about you? There must be some theaters out there that exemplify what we enthusiasts view as ideal moviegoing. Maybe even a few that aren’t brought up often.
With so many theaters worth fighting for, what tops the list?

(Thanks to PunkJr for providing the photo.)

Bruin, Village, and National, in the Westwood section of Los Angeles. Each one is single-screen and first-run, and they’re all within a short walk of each other.

The Ohio Theatre in Columbus is now primarily a live stage, but every summer they have a classic movie series. The theatre is well worth travelling out of your way for, and the movies look pretty good, too.

While you’re in Columbus, you may also want to stop by Studio 35 Cinema, the city’s only remaining independently-owned single-screen “nabe”, and the Drexel Grandview, a suburban first-run single-screen from the 1930s.

Here in Richmond, Va, the Byrd theatre is nice palace which recently got a major upgrade to Dolby Digital. The foundation for this theatre has recently been able to start plans to actually buy this theatre and do further renovations, after years of negotiations. On Saturday nights they also play the Wurltizer. All for two bucks.

And in DC—– definitely try to get to the Uptown. Though currently poorly managed by AMC, their 70 foot Cinerama screen (no longer made of strips of material, but otherwise authentic)is a thriller and the sound is great. This may be the last such screen extant on the east coast. And since AMC is not renewing their lease when it expires early next year, the days may be numbered for the Uptown. Also in DC… the Avalon, an old neighborhood theatre re-opened by a local group. And the AFI Silver, the main auditorium is a restored art deco marvel designed by Eberson…. and they are equipped for just about every film format except three projector Cinerama.
gb

The glorious El Capitan in Hollywood, The Avalon on Catalina Island, The Warner Grand in San Pedro, the Ziegfeld in Manhattan.

The Hyland Cinema in London Ontario Canada is the cities last single screen still in operation.Built in 1933 as the Elmwood,closed in 1989,reopened 2005 as an art theatre.It is very nice and the only alternative if you want the classic feel.400 seats down from 600.I am getting ready to mount curtains salvaged from downtowns last movie palace.

The Somerville Theatre near Boston is no longer a single screen, but the original 900+ seat auditorium is intact. The four additional screens were added in other parts of the building, not by chopping up the original theatre.

To my knowledge, it was never a first-run movie house during most of its 93-year history — but it is now, at least some of the time. The Simpsons movie will open on its big screen at the end of July, and what better place to see it?

I was thinking only of really big-screen theaters there, which is why I forgot the Lafayette in Suffern, NY. The screen may not be super large, but the appearance of the theater and everything about the way it is run makes it one of the best in the country.

I’d like to add a few geographically dispersed cinemas that are highly worthy. No surprises here, I’m sure:

Ron Newman took the words right out of my mouth. The Ohio Theatre in Columbus is #1 with a bullet in my book. And though I don’t think they do movies anymore — though I may be mistaken — the Akron Civic Auditorium is a stunning theatre.

For the moment considering only the States and not including Los Angeles (though I must mention the Avalon on Catalina Island) for full time moviehouses, I’ll suggest the following:

Many historic movie palaces have programs of classics, and I will add the Loews Jersey in Jersey City, NJ from that category.

Looking at Europe, in addition to selections not already mentioned and excluding London for the time being where there are so many:

the historic auditorium of the Eldorado, Brussels

in Madrid: Callao, Capitol, Palacio de la Musica. Madrid has been closing movie palaces, some becoming legit, some may become retail, and so see them while you can!

The National, Village, Bruin, Regent, Crest in Westwood (Los Angeles)…(catch the National while it is still open!!!)

I always try to visit the Continental any time I’m in Denver. The original auditorium with its giant 78' D-150 screen is still in operation, but to remain viable in today’s booking environment, new auditoriums have been built alongside it.

It’s my favorite place to catch a larger-than-life blockbuster, OR an older favorite as part of their Flashback Series.

Is that photo above of the Cinerama in Seattle? I’d vote for that one, too.

The Cinerama Seattle in the heading photo above does it for me everytime! Perfect presentation! Perfect!

I would like to add the origianl Century Domes in San Jose, Century 21 and 22. Century 21 is about 900 seats and resembles the Cinerama Dome in Hollywood. They were built around the same time. Century 22 is actually 3 individual domes of about 700 seats each. All have great screens and were recently upgraded.

i wish i could see every movie at the Cinerama Seattle

Whether it’s showing first-run, classic or arthouse films, The Senator is a must-see when visiting Baltimore.

The original auditorium of the Orinda Theater in Orinda CA is beautiful & intact! Ditto for the main screen of the CineArts in Pleasant Hill (one of the original dome theaters, opened in the mid-1960’s & is laid out like the Century 21 in San Jose CA). Also, the Paramount in Oakland (more a concert & play venue now, but has occasional forays into classic film).

Everytime I travel someplace new instate (CT) or elsewhere on my weeklong bicycle excursions, I make sure to find out which theaters from here are on or near my route. I make sure they are “closed” or “open” ones and not megaplexes. Sometimes I visit museums, but when I take notes on the theaters, I feel like I’m contributing something in this living history.

When I first walked into the Seattle Cinerama auditorium, I embarrassed the folks I was with due to an endless, Tourette Syndrome-esque supply of profanites of the “HOLY **ING IT” variety. That joint is Beau-Ti-Ful.

If you ever end up in St. Louis, MO, you’ve got to go to the Esquire Theatre – the last of the great St. Louis movie palaces that still actually show movies. It’s been balconi-fied and added on with 4 auds built in the late 80’s early 90’s. But the glorious main auditorium is still alive and kicking. That’s the screening room that introduced me to “Superman II”, “Return of the Jedi” and “Die Hard” (in 70MM to boot!).

The Somerville, Coolidge and the Brattle Theatres are my favorite Boston-area theatres, and they’ve shown some wonderful independent and classic films at all of these theatres.

My favorite out-of-state theatres are:

Clearview Ziegfeld Cinema and Radio City Music Hall, NYC, NY. These are wonderfully huge screens, and the great, golden oldie-but-goody classic film, West Side Story, looked beautiful on both of these really large screens. The Radio City Hall screen was huge, but not as long and narrow as the screen at the Ziegfeld, but they’re both great theatres.

Albany Palace Theatre, Albany, NY: This is a rather rustic-looking old palace of a theatre, which also does live performances as well as monthly classic films. Although the screen’s not super-large, it, too was a wonderful place to show West Side Story.

CineStudio Theatre, Hartford, CT: This particular theatre is part of Trinity College, which is a very pretty campus, but it’s abutted by poorer, run-down Hartford neighborhoods. Nonetheless, I had no problems, although I did lose almost an hour when the traffic on the Mass Tpke backed up at least 8-10 miles before the I-84 Exit, and through the tollbooth. Once I got past all that and through the tollbooth, however, I had no more trouble, and the rest of the drive down there went smoothly.

Anyway, back to the subject at hand: I went for a screening of West Side Story at the CineStudio Theatre about three weeks ago. It’s a wonderful-looking classic theatre, with just under 500 seats, including a balcony, and a 40-50 foot screen that’s somewhat more noticeably curved than other screens that I’ve seen. There was a beautiful new 35mm print of West Side Story, the same as I’d seen at the Brattle two months before, and the chairs were comfortable, to boot. I love seeing classics, especially WSS, in theatres where there’s a balcony.

btw—the Somerville Theatre’s main theatre is still intact….balcony and all, and I’m glad of it.

Althoght not redone yet, the LOEWS KINGS is to reopen in 2014,the last of the LOEWS WONDER THEATRES to be used again.