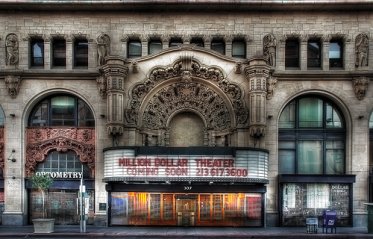 LOS ANGELES, CA — Following a long renovation process, the Million Dollar Theater is finally ready for its closeup again. A huge step forward for Broadway, the early stages were chronicled last year in a CT Interview.

For more than a year the red letters on the Million Dollar Theatre’s marquee have proclaimed “Coming Soon.” Last week, the static sign changed to “The Million Dollar Presenta,” ushering in a new era for the 1918 landmark as it reopened with a flurry of fanfare that included Aztec dancers, mariachis and other performers.

Following a yearlong renovation that cost more than $1 million, managing partner Robert Voskanian on Thursday welcomed a host of city and community leaders to the refurbished Spanish Baroque venue at 307 S. Broadway. Mexican singer and Latin Grammy winner Pepe Aguilar christened the theater’s massive stage, which has not seen a live performance in more than two decades.

With Broadway closed off to traffic, the theater’s glitzy debut was a snapshot of its past life, when it once drew throngs of patrons to watch the top entertainers and films of its day. The Million Dollar is only the third historic theater on Broadway to reopen for a regular slate of live concerts and events.

(Thanks to my hovercraft is full of eels for providing the photo.)

Have they put the name back up yet? I want to see it with the classic letters above the marquee!

Does anyone remember if the Million Dollar theatre had a vertical neon sign on the corner of the building at Third and Broadway?

I haven’t been inside the theatre since the 80’s but I remember the auditorium as short and wide with very steep balconies.