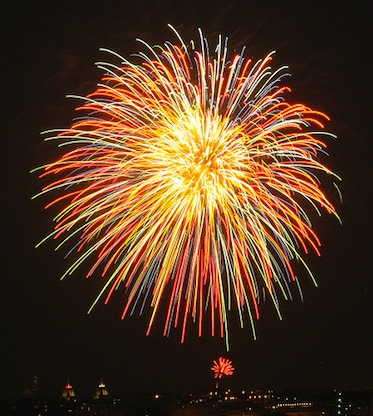 Cinema Treasures is proud to announce that we have now reached over 30,000 theaters listed from a total of 181 countries! The growth of our theater database over the last two years has been incredible and we simply cannot thank you all enough for your contributions, comments, and support.

This milestone comes at a particularly special time for us at Cinema Treasures as December 2010 is the official ten-year anniversary of the site’s launch. It is a time for us to look back to all of our users who have contributed so much to this community and, specifically, to our incomparable and tireless volunteer theater editor, Ken Roe. If you’ve ever added or updated a theater, Ken is the man who has formatted, edited, and/or published your information. In other words, there is no Cinema Treasures without Ken Roe. Period. He and our blog editor Michael Zoldessy make this place what it is.

Reaching 30,000 theaters is not the only achievement worth noting. One of Ken’s more amazing projects is that in addition to editing all of the new submissions he also adds a ton of new theaters to the site from all over the world. If you see a man photographing a cinema in your country, it’s very likely to be him. (Please say hello for me. If it’s not Ken, run!)

Ken and the site’s contributors have now added every cinema to have ever operated in the London/Greater London area, making this the first major international city on Cinema Treasures to have a fully comprehensive listing. The value of that contribution for film/cultural historians is invaluable and worthy of greater attention.

Also in the UK, thanks to Ken, Cinema Treasures now lists all currently operating cinemas in the country, which includes England, Scotland, Wales & Northern Ireland. Cinema Treasures also now lists every historic cinema in the UK which has a designated ‘Grade Listing’.

If you have a moment, please leave Ken a thank you message below. He deserves our undying gratitude for what he has helped build over the past decade.

We are also grateful to have the input of the many members of Cinema Treasures around the world who continue to contribute to the expansion and knowledge that makes this site so great.

I can’t believe this site is ten years old and I can tell you that when Patrick Crowley and I were putting this idea together eleven years ago on nights and weekends in a New York tech incubator, we would have been thrilled with 1,000 contributions. Your support and the site’s growth is simply unbelievable.

We’ll have more to say about the anniversary in the coming days but for now, my sincerest gratitude to you, our users, and to Ken Roe for being Ken Roe. We couldn’t be luckier to have him.

P.S. Thanks to “Camera Slayer” for the image.

ken its great what you do. I enjoyed meeting you in Los Angeles a few years back and can’t wait for you to come back here. Thanks fir all you do.

Well done lads and all thanks to you! Tremendous resource. Keep up the good work!

Congrats,gents,on 10 years. Here’s to ten more. Thanks for all your hard work in putting such an ambitious site together.

Thank you Ken, for your tireless globetrotting, both real and virtual. I have had many instances of eye-rolling smiles, when I’ve commented-on or looked at an obscure theatre, only to find that, “Ken got there first!” and then say to myself, “Why am I not surprised?!”
Thanks to Ross, Patrick, Michael, and everyone who has worked so hard at organizing all the information all of us out here share with the site. Happy Anniversary, CT!

YOU ARE THE BEST KEN…THANKS FOR ALL THE HARD WORK YOU DO FOR US!!

AND PLEASE KEEP UP THE GOOD WORK.

Congrats to all who make Cinema Treasures live & breathe!

Certainly praise and thanks to Ken and to Michael, Ross, and Patrick for creating and maintaining my favorite place to go on the internet!

I am proud to support this website. Congratulations and here’s to continued success!

I always go to this website and comment on theaters that I’ve been to or seen on TV or on the way to somewhere. The comment emails keep me updated on what’s going on with the theaters. I hope this site doesn’t get taken over by some commercial website as this site is independently run.

Congrats to Cinema Treasures, my favorite website, on reaching this milestone. And special thanks and regards to Ken, a tireless worker if ever there was one. It’s good to know that his contributions and talents are appreciated here at CT and also in the Cinema Theatre Association in the U.K.; it’s always nice when dedicated workers are recognized, and not insulted as they are in certain organizations.

Somewhere amongst my tons of theater memorabilia GOODIES, I have a framed, letter-size, bright red sign which clearly states: “OUR VOLUNTEERS ARE UNPAID, NOT BECAUSE THEY’RE WORTHLESS, BUT BECAUSE THEY ARE SIMPLY PRICELESS!”.

When ever I presented a special program of entertainment, I made sure this ‘message’ was clearly displayed for all patrons to see. And finally, I would call for our volunteers to come to the stage for a round of applause.

Two effortless and simple words of “THANK YOU” go a hell of a long way in my vocabulary. And I heartily echo them to one and all who’ve made CT such a pleasure to log into.

Finally, I enjoy informing cinema patrons about CT’s website and its great offerings… do you?

AWESOME!!! CONGRATULATIONS!!! I LOVE THIS SITE!!!
.
.
.
Can we get the Photo feature fixed? And how about a chance to edit our posts?

Thanks for all of your efforts!

One suggestion – could you give us the ability to subscribe to comments on a theatre without adding our own comments?

A big thanks to Ken, Ross, Michael and Patrick!

Congratulations Cinema Treasures, Ken and all members making this one of if not the best websites on the net.

Congratulations! Wonderful site, I go in to it several times a day.

Congratulations on your successful nurturing of one of the most vital websites. Here’s to many more wonderful years and accomplishments.

I made Ken work the other day…saw the theater count at 29,998 and racked my brain for three drive-ins, a storefront art house and a Jerry Lewis Cinema that weren’t listed yet. I think somebody else got the actual 30,000th but what the hey. Thanks to Ken and all others involved with the site. It’s been fun and I’ve learned a lot.

Been waiting a week for that! I purposely posted mine as a few before 30k hoping for a piece. Oh well. Congrats all!

“Ken and the site’s contributors have now added every cinema to have ever operated in the London/Greater London area, making this the first city on Cinema Treasures to have a fully comprehensive listing.”

You may want to rephrase that as I’ve cross referenced all years in city directories in my area for any and all theaters to present day.

Dave — what city is that? I would be glad to amend the post! Regarding site improvements: we are working on a new version of the site. It’s going to be great and, yes, photos are coming back in a big way. There will be a few other surprises as well. Ron — we will have a new way to subscribe to theaters without needing to comment on them. More to come soon I hope.

Thanks for all of the nice notes everyone. It means a lot to us. This milestone is really all about Ken, though. It’s a testament to his efforts and his immense knowledge. I don’t know if there’s a soul on earth that knows more about global theaters than him. And given the brain trust on this site, that’s really saying something.

Congrats to Ross, Patrick, Ken, and everyone who contributes to the site. It’s a truly wonderful place!

A warm thank you and congratulations to Ross,Ken,Patrick and the crew for all the hard work you put into this site and providing us with 10 years of great memories.

30,000 theaters and ten years is a huge accomplishment. Kudos to Ross and Pat for creating this website and maintaining it. And Kudos to Ken for keep the place organized and in one piece! Great job, guys, and great site!

Hey, here’s a slogan for ya: “All I Need To Know About Theaters I Learned From CinemaTreasures!”

Ken Roe’s addition of UK cinemas would is a stellar accomplishment! Thanks to him, to Ross & Patrick, and to many other volunteers for this wonderful website.

Well done to all, especially Ken.

The first query I ever entered in a search engine was “Where can I see pictures of classic theaters?” When I found this website and the thousands of links it provides, I was in heaven.
Thank you all for the great work!!

This is a huge accomplishment, and great thanks go to all the folks out there who continue to find great photos and information to keep us all interested in a great business.

Congratulations to the both of you!!!

And thank you so much for creating and maintaining this wonderful website.

Ross, Danbury. Found all the old ones in the city directory. Others too.

A belated but very hearty congratulations to CT and Ken. I particular appreciated the help Ken provided when I added my first – and to date only – theater to this site.

I second that! Keep it up, guys! Ya done good!

Congratulations everyone — thank you for hosting this celebration of the movie theatre experience, and giving 30,000 of them the chance to be “Cinema Treasures.”

Thanks to Ken, and every Theatre Lover out there for this great site!