Bethesda Theatre to be auctioned 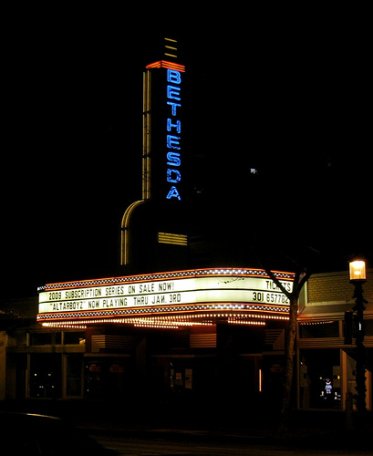 BETHESDA, MD — The 1938 art deco Bethesda Theatre will be auctioned off on June 29 as a result of its current owners defaulting on a mortgage. It was converted in the 1980s to a brew-and-view and still later to a live performance venue.

More recently, it underwent a $12 million renovation in 2007 by The Bozzuto Group, which received roughly $3.5 million in state and county funding and tax credits to build apartments above the theater.

Earlier this spring, the theater’s owners said that they were seeking assistance to help revitalize the struggling property.

Tom Baum, president of the Bethesda Cultural Alliance, which owns the theater, said their efforts to build up a subscription base fell short as the recession hit and entertainment spending slowed.

(Thanks to rex libris for providing the photo.)

What a shame. Had the place shown movies, I would have visited the place at least once, but from what I remember seeing of the interior, this place was a mere shell of its former self.

I believe it was this theater that my Dad, brother and I saw Flash Gordon in 1980, to a packed crowd here enjoying the campiness and romp that the movie was. Queen’s soundtrack was different and, at the time, I thought cool.

oh well, all that money and they couldn’t get their act together, or able to book anything that interesting. Personally I would have booked more music, comedy acts and less theatre, the stage that they built just wasn’t suitable – it was set way too back. Jeesh, throw a screen back up and I’d be happy.

The interior of the renovated theater is actually gorgeous — they spent millions of public dollars on rehabbing the space once the Cinema and Drafthouse moved out. However, it was designed for live theater and intentionally (and foolishly, in my opinion) NOT outfitted for film exhibition.

No one bid on the theater at auction (not surprising, the auction was more of a formality), so the bank that holds the note entered a qualifying bid to retain the property and will now try to sell it on the open market.