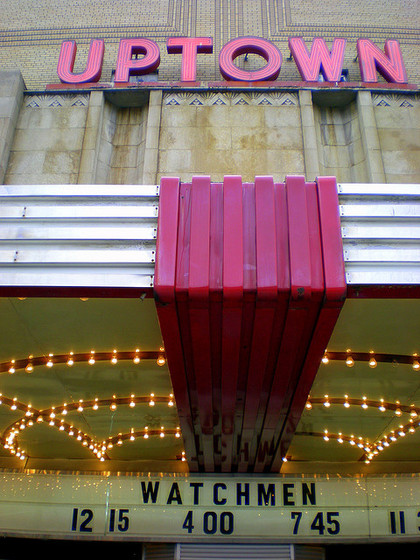 (Thanks to Kevin H. for providing the photo.)

J. Edgar opens here on Fri., which should be interesting given the advanced word on this film. Eastwood is a very good director. I can’t believe he was robbed of at least an Oscar nomination for ‘Gran Torino’ back in ‘08, which I think was one of his best performances and directed film.

As for the Uptown herself, the theater has very pleasant memories for me way back in the 70-90s., when they booked 70mm. Too bad they do not do them anymore. At least the 3D conversion updates the venue, which isn’t cheap. Its viability is more likely now giving it more commercial opportunity to book those great 3D films of late..Tron Legacy and Megatron. ;)

BTW, the film that opened the theater was “Cain and Mabel.” A clever play on words.