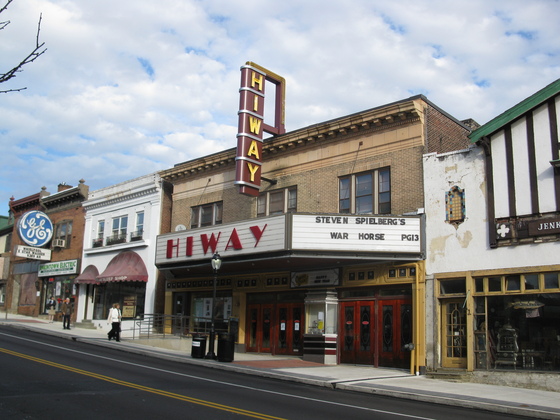 The nineteen foot tall Neon Tower was manufactured by Bartush Signs. Replacing the original vertical sign that was in place from 1940 until the 1980s, the new sign is in the same Art Moderne style and has the same dimensions. The new sign is burgundy with yellow letters, antique gold neon, and aluminum trim.

The vertical sign cost nearly fifty thousand dollars. The nonprofit organization that rescued the Hiway Theatre in 2003 and renovated the theater raised the funds for the sign from private donors, from the Pennsylvania Historic and Museum Commission, the Revitalization Fund/Facade Program Grant administered by the Jenkintown Community Alliance, the borough of Jenkintown, and the Montgomery County 2011 Community Revitalization Program. Next year, in 2013, the Hiway will celebrate its 100th Anniversary!

(Thanks to Howard B. Haas for providing the photo.)