‘The Producers’ & 2 screwball comedies at the Loew’s Jersey Theatre 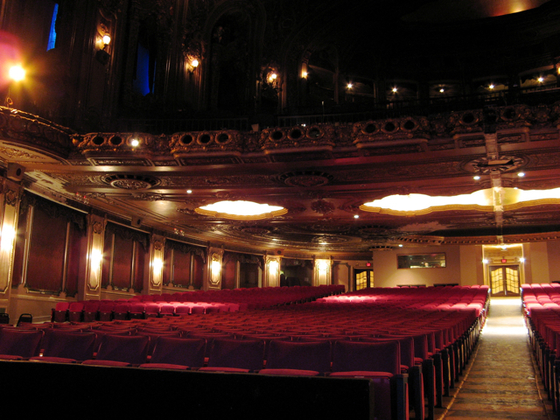 Just for Laughs … The Producers & A Couple of Screwballs

All Titles Screened in 35mm on our BIG 50ft Wide Screen

Down-on-his luck Broadway producer Max Bialystock, played with perfect snake-oil salesman-like pitch by Zero Mostel takes an offhand comment by his new accountant, played with perfect wide-eyed innocence by Gene Wilder, and turns it into the ultimate ponzi scheme: the two will oversell shares in a new musical, make sure the show is a flop that closes on the first night, and keep all the money. In search of a surefire flop, the pair pick a musical about Hitler written by a drunk, unreconstructed Nazi, hire a pompously inept director who also happens to be a transvestite, and cast a thoroughly untalented singer with the initials L.S.D. (it was the ’60s, after all) as the star. Such a show would have to flop — right? “The Producers” is filled with some of the funniest dialogue in the entire Mel Brooks' canon, some of the most outrageous musical numbers in film history — including the immortal production of “Springtime for Hitler” — and a truly inspired concept that is at once a send up of the old “let’s put on a show” movies and an insightful skewering of show biz. Interestingly, Brooks doesn’t depend upon the crazed anarchic pacing of a Marx Brothers' film to grab the audience, but instead seems to purposely slow the story down so the audience can enjoy the comic repartee. Incredibly, “The Producers” was not well received when it premiered, perhaps because hit Broadway musicals with macabrely dark subjects such as “Sweeny Todd” and “Evita” were still in the future, so the idea of a musical about Hitler probably seemed even more outrageous then than now. But in the years since, of course, the film inspired a real-life Broadway hit and a re-make, and is generally recognized as one of the funniest movies ever made.

In the midst of the Great Depression, a spoiled daughter of a wealthy family wins a prize by bring an unemployed man living at the town dump to a party. The girl falls in love with the man and impetuously hires him as her family’s butler. We soon find there’s more to the man than the girl or we suspect, and less to the girl’s wealthy family and vapid circle of rich, spoiled friends. Screwball comedies were born in the Depression and used a unique elixir of slapstick, fast repartee, farce, and discrete (thanks to the then-new Hollywood Production Code) but unmistakable sexual innuendo to help people cope with hard times. But they also had an edge of decided class consciousness, skewering the idle rich who didn’t event seem to know there was a Depression. Few screwball comedies did this more pointedly yet enjoyably than “My Man Godfrey”, which boasts one of legendary Carol Lombard’s greatest performances and William Powell at his debonair, ironic best. It’s the 99% vs. the 1%, 1930s style – which is to say, stylish and funny with a bite.

One of the crowning comic achievements in the careers of director Howard Hawks and of stars Katharine Hepburn and Cary Grant, “Bringing Up Baby” is also the ultimate distillation of the screwball comedy. The story, such as it is, involves a nerdish paleontologist, an heiress determined to snag him, two leopards, a dinosaur bone and mistaken identity. But this plot is kind of the comic equivalent to Hitchcock’s “MacGuffin”, the necessary artifice to allow a non-stop parade of inspired gags, incredibly smart and funny wordplay and the pointed if hysterical skewering of the archetypes that screwball comedy so deftly makes fun of: the idle rich, eggheads and officialdom. All in all, it is simply non-stop fun. “Bringing Up baby” is truly a comedy for all the ages. $7 for Adults, $5 for Seniors (65+) and Children (12 & younger).

The Loew’s Is Easy To Get To: The Loew’s Jersey Theatre, at 54 Journal Square, Jersey City, NJ, is directly across JFK Boulevard from the JSQ PATH Center with trains to and from Lower and Midtown Manhattan and Newark’s Penn Station, and is minutes from the NJ Turnpike, Rts 3 and 1&9 and the Holland & Lincoln Tunnels. We’re easy to reach by car or mass transit from throughout the Metro Region.

Discount off-street parking is available in Square Ramp Garageadjoining the Loew’s at the foot of Magnolia Avenue off of Tonnelle Avenue, behind the Loew’s. Patrons must validate their parking ticket before leaving the Theatre.

Classic Film Weekends are presented by Friends of the Loew’s Inc.

(Thanks to kiwiplant for providing the photo.)

Thanks to the Loew’s for programming The Producers, a movie I’d always wanted to see with an audience in a theater, but never got the chance until now. Same goes for next week’s showing of Mothra – that one seems like a real rarity.

I am studying in college. I was once stuck with my dissertation and without a second thought, I planned to take help from the papers writers. It made me realize that how smart these people are who are working for others tirelessly.