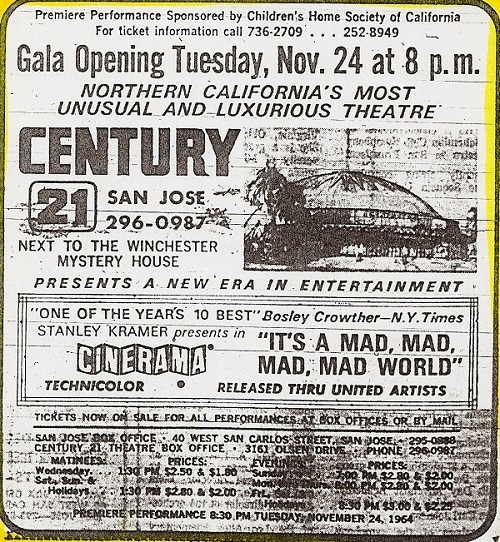 The following is a semi-regular series of retrospectives on CINERAMA, the legendary motion picture process that kicked off the widescreen revolution. The series focuses on providing a market-by-market historical record of when and where Cinerama and its multi-panel clones were exhibited. These easy-to-reference articles serve to provide nostalgia to those who experienced the Cinerama presentations when they were new and to honor the movie palaces in which the memorable screenings took place.

KRAKATOA, EAST OF JAVA
Town & Country
August 1, 1969
9 weeks
70mm / 24fps / 6-track stereo
“The NEW SUPER CINERAMA hurls YOU into the incredible day that shook the earth to its core!”

San Jose was planned to be the 61st 3-strip Cinerama market in the United States with its Century 21 being the 10th purpose-built Cinerama theater. By the time the theater was completed, however, Cinerama had been re-engineered into a single-strip 70mm format and so the theater was equipped only for 70mm (and 35mm) presentations on a large, curved screen.

The Century 21 hosted the longest-running engagement in the United States of 2001: A SPACE ODYSSEY.

The Cinema 150 was located in the San Jose-adjacent city of Santa Clara.

I never saw any of the above-mentioned films, except for “It’s a Mad, Mad, Mad, Mad World”, back in the early 1960’s, when it first came out. I loved it, but it’s not a film that I’d see more than once.

87 weeks for “2001” – wow! Isn’t San Jose part of Silicon Valley? I wonder if the movie inspired some of the locals to go into the computer field?

A mind-boggling engagement for “2001!” That 70mm print had to have been worn out by the end of the run. Wonder if it was replaced with a new print after a year or so of showings?

Nick: Thanks for steering us to the Boxoffice Magazine vault. It will soon be up there with Cinema Treasures as one of my favorite websites. Their critic, Jim Watters, wrote an extremely perceptive review of 2001 in the 4/8/68 issue, at a time when some of our most esteemed critics just didn’t get the film (or didn’t want to get it). Thanks again.

Anyone know if when they showed “THIS IS CINERAMA” at the Cinema 150, did they show it on the FULL Dimension 150 SCREEN with the D-150 Super Curvulon Projection Lens or was it shown on the masked off 70mm screen?

I am speculating, but my guess would be that it was masked down for one or both of two reasons. First, as you probably know, 20th Century Fox’s licensing agreement with D-150 equipped theaters required the screen to be masked down except when showing anything but a film lensed in D-150 (all two of them). I have read that some D-150 equipped theaters did not always do this, but I have no knowledge of any instances of noncompliance.

Secondly, those 70mm prints of “This is Cinerama” had a projected ratio of only 2.20 to to 1 rather than the original ratio of about 2.60 to 1 when the three-panel process was used. It was not possible to transfer the full width of the original three-panel images onto the 70mm stock – the left and right original images were cropped. So, “This is Cinerama” in 70mm had the projected ratio of just about any wide screen film of its era except for three-panel Cinerama films and those shot in Ultra Panavision 70/Camera 65.

Oh…I forgot about “2001: A Space Odyssey”. I saw that when it first came out, and several times thereafter. A good, well-done film, but the last time I saw it, I’d forgotten how freaky that film was.

Bill, I’ve spent hours at a time in the Boxoffice vault. A warning should be posted—this site highly addictive! Thanks for the “2001” review link. The film was a life-altering experience for many who saw it in Cinerama. Seeing it in any other format is not quite the same.

Interesting it took until August of 1969 for San Jose to open ICE STATION ZEBRA as a 70mm (presumably roadshow) engagement. The film had opened in Bakersfield in 35mm 4-track as a regular run in June of that year.

It has to be kept in mind though that until November, 1964 when the Century 21 opened in San Jose, Cinerama regarded the Bay Area as a single market with the exhibition site being San Francisco. I am sure many people, especially Cinerama fans in the greater San Jose area, made the forty mile or drive to San Francisco to see Cinerama films at the Orpheum or the Golden Gate and were accustomed to doing so.

By the time “Ice Station Zebra” opened in San Jose, it had completed its run at the Orpheum several months previously in San Francisco and, in a way, Cinerama (at least the 70mm version) in San Jose was sort of catching up to the Cinerama exhibition history that was now fully played out in the City.

The Century 21 certainly would have wanted to play successful Cinerama films as long as they were substantially profitable, and, at the same time, may have had contractual obligations to play other Cinerama films at certain times. It seems to me that it is obvious, looking at the list of Cinerama films that did not play in San Jose that by the end of the run of “Ice Station Zebra,” the San Jose Cinerama houses had pretty much given up on Cinerama.

The run that impresses me on this list (and on some others) was the relatively long run “Grand Prix”. Considering how relatively forgotten that film is now, that racing photography must have impressed many people in some markets at the time.

The old Century 21 still stands today but in the worse way. The Syufy brothers under the name West Wind still run the place and many years ago they took many feet off the sides of the large curved screen and made it 35% smaller. They un plugged the giant curtains and run the projector light at about a 60% level. Good thing they never put in 3-D. No more showmanship at this old classic dome theatre. When the old man MR Ray Syufy got rid of the union projection guys and had candy help to put up 70mm film at the Century 21 they ruined many prints and the studios did not give him anymore 70mm prints to run for a long time. I remember going to see a 70mm print at the C21 and it was put on backwords. How sad this great Super Cinerama Theatre is still run so bad. They have a long lease on the land worth big bucks along with It’s neighbor the Century 22 3 plex, days of going to a a film on the huge screen are gone in San Jose. The Syufy family was so upset when the Fox West Coast (Mann) people opened another Super Cinerama type curved screen across the street at the Town & Country. If you go see a film at the Dome 21 complain about the light level, talk to the manager if you can find him or her. Get a refund like I did and see a film at a AMC Theatre in the area that has good light level.

Regarding CSWalczak’s analysis and speculation…

It seems obvious to me that the reason it took so long for ICE STATION ZEBRA to play in San Jose was because of the extended run of 2001: A SPACE ODYSSEY. Up until the ISZ run, all Cinerama films in San Jose played exclusively at the Century 21. The long run of 2001 is clearly what prompted the Town & Country to “become” a Cinerama house to play KRAKATOA, and in turn prompted Syufy to show ISZ in another one of their roadshow domes instead of waiting until the 2001 run to end. The fact that ISZ had already played in San Francisco is irrelevant.

It seems absurd to suggest that San Jose gave up on Cinerama during the time you cited when they were at that time showing what turned out to be the country’s longest run of 2001. The fact that San Jose played 2001 for so long and still found a way to play KRAKATOA and ISZ suggests they had not given up on Cinerama.

I think you may have misinterpreted the list of Cinerama films that did not play in San Jose. The first 12 on the list were released before San Jose came online as a Cinerama market, and the first 10 titles on that list obviously weren’t played because of format incompatibility. The Century 21 did not play exclusively Cinerama product, and an extended run of MY FAIR LADY is what prevented THE HALLELUJAH TRAIL from being booked. A lengthy run of DOCTOR ZHIVAGO prevented first-run bookings of RUSSIAN ADVENTURE and KHARTOUM. And CUSTER OF THE WEST not being shown carries little weight since its Cinerama/roadshow release was jettisoned by its distributor before it had a chance to get many playdates. California had six Cinerama markets and only one of them played CUSTER.

By the time of the THIS IS CINERAMA re-issue, there’s no reason to believe the D-150 licensing agreement would still be in effect in regard to projecting a 70mm image onto the entire screen at a D-150 house since nobody was producing any films in D-150. There’s no way any of us can prove it at this late date, but I can’t imagine THIS IS CINERAMA or any other 70mm film not being shown on anything but the entire screen.

This has been incorrectly explained in comments on this page as well as other entries in this series, but Cinerama presentations of films shot in Super Panavision and Ultra Panavision were shown in the same aspect ratio and with identical screen dimensions. The difference between the two was accounted for with the rectification added into the prints. I know it’s confusing and difficult to explain, but for 70mm presentations on a deeply-curved screen, to calculate aspect ratio one must measure along the cord not the curve.

Regarding whether D-150 theatres could show other widescreen movies on the full screen by 1973, the answer is YES. The Cinema 150 in Santa Clara (now demolished) showed both “This Is Cinerama” (70mm version advertised as Cinerama) and “The Sound of Music” (advertised as Todd-AO) in September of 1973. I saw them both, and they were projected full screen.

You make such a variety of extraordinary focuses here that I read your article a few times. Your perspectives are as per my own particular generally. This is incredible substance for your perusers. GClub

There are some interesting points in time in this article but I do not determine if I see every one of them center to heart. You can find some validity but I will take hold opinion until I investigate it further. Excellent write-up , thanks and now we want far more! Added to FeedBurner in addition home improvement mortgages