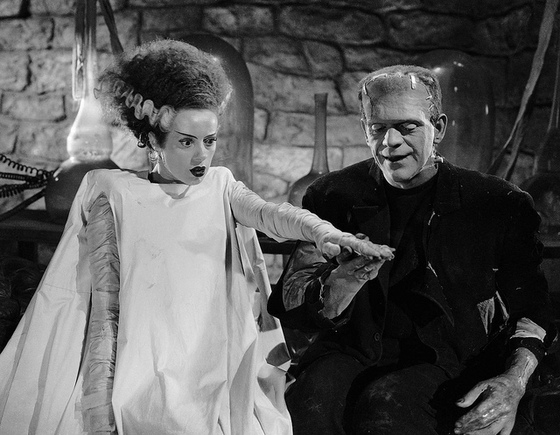 Friday, October 25 8PM “Black Sunday” Starring Barbara Steele. Directed by Mario Bava. 1960, 83mins, B&W Not to be confused with the 1970s Blimp/Superbowl movie of the same name, this is one of the most influential horror films NOT made on Universal’s sound stage; it helped to reinvigorate the Gothic horror genre for a new generation. A woman who is gruesomely executed as a witch in the 1600s vows revenge on the family who killed her and returns from the grave two centuries later to keep her promise. Considered the greatest example of Italian Gothic Horror, the film is far less concerned with exploring its characters' psychologies as were American horror films of the same era. Instead, it creates an extraordinary visual experience for its audiences with an atmosphere so heavy and imagery so dense that the sheer, ghastly beauty of it all is entrancing.

Saturday, October 26 6:30PM “The Bride of Frankenstein”
Starring Boris Karloff, Elsa Lanchester. Directed by James Whale. 1935, 75 mins., B&W Of all the monsters who have stomped across the silver screen, Frankenstein’s Monster is the most famous. He is the unquestioned king of Universal’s classic horror. Of all the actors who’ve played him, only one has captured the public’s imagination even though he had the role in only three films: Boris Karloff. And of those three movies, “Bride of Frankenstein” is widely considered to be one of the best horror movies of all time. Unlike the first Frankenstein movie, Universal provided a big budget for what had become a very valuable franchise. Boris Karloff again delivers a powerful performance as the Monster; his tortured creature is, if anything, even more humane and sympathetic than in the first film. Elsa Lanchester plays the real life author of the Frankenstein book, Mary Shelly, as she tells a tale that becomes the movie. And she also plays the female creature that Henry Frankenstein brings to life as the mate for his earlier monstrous creation. Director James Whale added in his usual compliment of memorably eccentric characters, including Una O’Connor as Minnie the shrieking servant and demented hunchback Dwight Frye. The movie is further enhanced by the vivid Franz Waxman musical score. And of course, Universal’s superb make-up artist, Jack Pierce, again created the signature Frankenstein face. “The Bride of Frankenstein” is one of the greatest horror films ever made.
Admission: $7 for Adults, $5 for Seniors (65+) and Children (12 & younger).

If Universal Pictures defined the horror movie for the talkie era with “Frankenstein” and Boris Karloff, they did the same thing in the silent era with “Phantom of the Opera” and Lon Chaney, Sr. The melodramatic tale of a deformed man, an abused outsider all his life, searching for love in a world of socialites repulsed by his presence, was heavily influenced by German Expressionism, with its moody sets and murky patterns of shadows and light. 1925’s “The Phantom of the Opera” set the style that would become horror’s hallmark in the 1930s with such subsequent films as “Dracula” and “Frankenstein”. The film’s visual emphasis on subterranean settings and its impressive sets, such as the Paris Opera House, also clearly informed these later films. As the Phantom, Lon Chaney – who besides acting was also arguably Hollywood’s first make-up genius —created such a riveting but empathetic villain that it was nearly impossible not to root for him. It is a tribute to the power of his performance and of the production that this silent movie is still one of the most famous films of all time, and the moment when the Phantom’s mask is ripped away remains one of the most chilling moments in movie history. Accompanied by Bernie Anderson on the Loew’s magnificent 1,800 pipe Wonder Morton Theatre Organ. Admission: $10 for Adults, $8 for Seniors (65+) and Children (12 & younger). – – – Combo discount available for both screenings. – – – **Film descriptions are compiled from various sources.

I’m assuming these are 35mm prints and not being shown on video?