Sci-Fi and Ray Harryhausen at the Loew’s Jersey 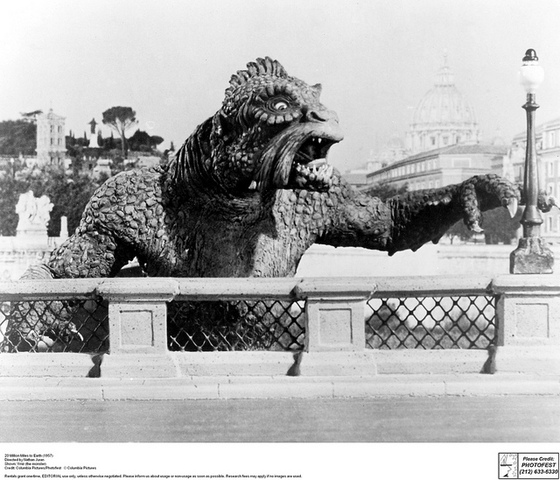 Friday, June 7 8PM “Men In Black” Starring Tommy Lee Jones, Will Smith, Rip Torn. Directed by Barry Sonnenfield. 1997. 98mins. Color. Rated PG-13. Imagine mashing up a bunch of 1950s sci-fi movies, adding an appreciative nod to their classic camp and cliches, tossing in some of our era’s darkly tongue-in-cheek sensibilities and eye-popping computer special effects, and topping it all off with two terrific performances that create one of the most enjoyable, if somewhat bizarre, partnerships in screen history — and you get “Men In Black” . Will Smith stars as a New York City cop with an athletic physique and a flippant, anti-authority attitude. After chasing down a mysterious perpetrator one night who turns out to be an alien, he is recruited by “K” (Tommy Lee Jones), a veteran of a clandestine government agency that secretly polices the comings and goings of aliens on planet Earth. Nicknamed the “men in black” for their nondescript uniform of black suit, shoes, tie, and sunglasses, the two agents are assigned to recover a bauble that’s been stolen by an intergalactic terrorist (Vincent D'Onofrio). The theft has plunged humanity into the center of what’s shaping up to become an interstellar war, unless K and his new wisecracking partner, now renamed “J,” can stop the bad guy. “Men In Black” is one of those rare box office mega-hits that has transcended all of its hype to become a modern classic; it’s so much fun, you can watch it again and again and enjoy it every time.

Saturday, June 8 6:30PM “20 Million Miles To Earth” Special Effects by Ray Harryhausen. Starring William Hopper, Joan Taylor. Directed by Nathan Juran. 1957. 82mins. B&W Fans of 1950s sci-fi monsters will relish “20 Million Miles To Earth” , one of legendary special effects master Ray Harryhausen’s earlier works. It’s a typical genre effort in terms of the story: a gigantic creature is loosed upon hapless civilization and must be stopped for the safety of the human populace. An American spaceship crashlands off the coast of Sicily. The rescue party discovers that the astronauts have inadvertently brought back a curious gelatinous mass from the planet Venus, which rapidly develops into be a living reptilian creature. Before long, the monster has escaped and is wreaking havoc in Rome. After battling a zoo elephant and taking a swim in the Tiber, the gargantuan creature holes up in the Colosseum, where the film’s pyrotechnic finale occurs. So it has all of the fun, thrills and unintended camp that is the hallmark of ‘50s sci-fi. But it has one thing more that separates it from all the others – Harryhausen’s spectacular work, here on a limited budget. From the moment he appears as a baby, rubbing his eyes because the light is too bright, this monster has personality and he captures our attention and, dare we say, our affection even as he’s causing destruction.

Saturday, June 8 8:20PM “Jason and the Argonauts” Special Effects by Ray Harryhausen. Starring Todd Armstrong, Nancy Kovack, Honor Blackman. Directed by Don Chaffey. 1963. 104mins. Color. Greek mythology is brought to life by the extraordinary stop-motion animation of Ray Harryhausen. Jason (Todd Armstrong), rightful heir to the throne of Thessaly, is spared from death through the intervention of the goddess Hera (Honor Blackman). The other celestial inhabitants of Mount Olympus watch in amusement as Hera surreptitiously aids Jason in his search for the Golden Fleece. Obstacles to his goal include a giant come-to-life statue named Talos, a set of huge clashing rocks, the seven-headed hydra, and an army of skeletons — a bravura climactic sequence that assured Harryhausen’s place in the hearts of 13-year-old boys of all ages! Despite vast advances in special effects technology in the half century since the film’s release, “Jason and the Argonauts” stands up remarkably well as thrilling, eye-popping cinema. And Bernard Herrmann’s surging musical score is icing on the cake for what many consider to be the greatest of all Ray Harryhausen creations.