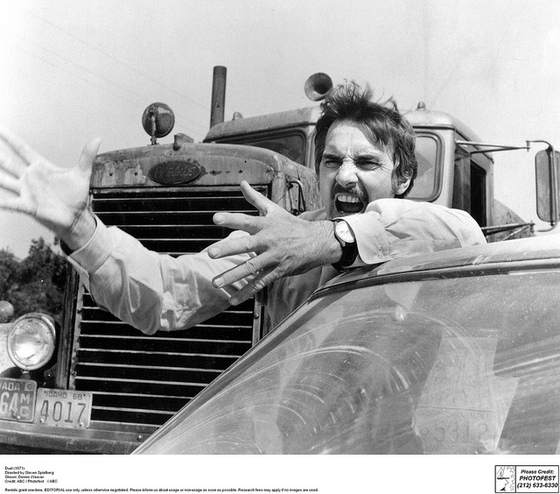 Cutting To The Chase … On The Big Screen The Landmark Loew’s Jersey Gets Our New Season Of Classic Film Off To A FAST Start With 2 Movies Famous For Suspense, Action … And Legendary Chase Scenes

“Duel” is a title that’s taken on legendary status with many film fans. Still, more than a few haven’t heard of it. But they should. It is a taught, minimalist but utterly gripping film, with considerable suspense and action. It is also, arguably, one continuous chase scene. Driving down a deserted Southern California highway at a safe and sane 55 miles per hour, a traveling salesman (Dennis Weaver) steps on the pedal to pass a large gas trailer truck. Moments later, the truck is back, dangerously tailgating. For the next 90 minutes, Weaver finds himself pitted against the trucker in what increasingly seems to be a motorized duel to the death. The truck driver’s face is never shown and his motives are never clear, giving the story a Kafkaesque quality, as the salesman is psychologically tortured while being physically terrorized. It is one of the most arresting evocations of the feelings of isolation and paranoia that seemed to haunt Americans in the 1970s. And the film has one of the most remarkable pedigrees of any movie. It was, of all things, shot as an ABC Movie of The Week adaptation of a short story that appeared in Playboy and had been inspired by a real incident. The director ABC chose was a 23 year old Steven Spielberg. “Duel” is Spielberg’s first major directorial feature. First telecast on December 18, 1971, “Duel” was shown theatrically in Europe in the early ‘70s but did not have an American release until 1983.

1968’s “Bullitt” is a watershed film in a surprising number of ways. For one thing, it is arguably Steve McQueen’s greatest performance – the one that made him a superstar. He plays a tough, fashionably icy police detective who’s trying to trace the leak that allowed hitmen to ambush the Mob-turncoat he was assigned to protect. In this, “Bullitt” recharged the crime-thriller genre for a new generation with a stylization that incorporated a snappy, faux-natural look and a gritty, cynical urban feel that it wore on its sleeve – a look and attitude that would become a hallmark of American films in the 1970s. But most famously, “Bullitt” contains a car chase scene, a roaring ten minute sequence up and down seemingly every hill in San Francisco, that is still regarded as one of the best pursuits ever filmed – and has been imitated and embellished in dozens of movies and TV shows ever since. Best of all, “Bullitt” remains a fun movie to watch – especially on the Big Screen. Admission Each Film: $7 for Adults, $5 for Seniors (65+) and Children (12 & younger). – – – Combo discounts available for multiple screenings in a weekend. – – – **Film descriptions are compiled from various sources.The Loew’s Is Easy To Get To: The Loew’s Jersey Theatre, at 54 Journal Square, Jersey City, NJ, is directly across JFK Boulevard from the JSQ PATH Center with trains to and from Lower and Midtown Manhattan and Newark’s Penn Station, and is minutes from the NJ Turnpike, Rts. 3 and 1&9 and the Holland & Lincoln Tunnels. We’re easy to reach by car or mass transit from throughout the Metro Region.