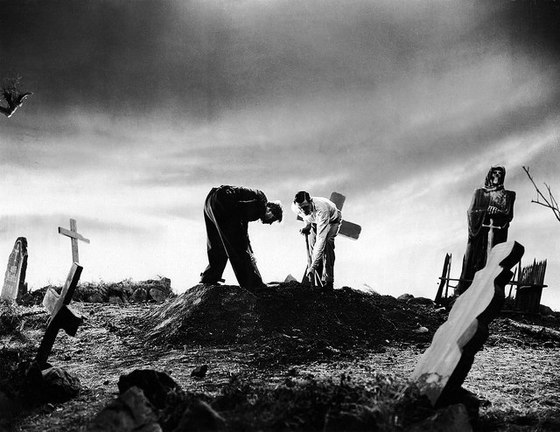 In our time of CGI, digital 3-D and cinema surround sound, you might think a 92 year old German silent movie would pale in comparison. But you would be very wrong. “Nosferatu” remains one of the most chilling and legendary horror movies ever made. It was the first – although unauthorized – feature film version of Bram Stoker’s “Dracula”. Stoker’s widow sued and won for copyright infringement and all copies of “Nosferatu” were supposed to be destroyed. Fortunately a few prints survived. Ironically, “Nosferatu” is now considered one of the best interpretations of Stoker’s Dracula ever filmed. Still, it differs from the book in several notable ways, including the names of central characters and locations. It, not the book, cemented into the Dracula canon the idea that vampires are destroyed by sunlight. And the ending differs from Stoker’s. The film presents one of the more suggestive mixes of innocence and evil, self-sacrifice and eroticism of the silent era. The singular performance and truly lurid makeup of Max Schrek as the vampire is one of the most iconic representations of evil ever filmed. But the greatest source of the film’s enduring power is the eerie look and truly disquieting mood that pioneering director F. W. Murnau achieved by merging German expressionist style with real location settings, daring experimentation with stop-motion and reverse-negative effects, and the use of dramatic shadows and long angles – which became a kind of visual lexicon for horror on film. When this is combined with live organ accompaniment, as it will be at the Loew’s Jersey, “Nosferatu” is a truly unforgettable experience.

If “Nosferatu” could be called the definitive horror movie of the silent era, then “Frankenstein” is surely THE definitive horror movie of the talking picture era – and that says a lot, since the movie was made just four years after the arrival of sound. In the 83 years since, no big budget horror spectacular, with color, the latest in surround sound, and the best digital effects money can buy even comes close. Just say its title, and a host of stark images come to mind, and a complex mix of terror and sadness overtakes the soul. That’s because director James Whale knew his medium and didn’t clutter the action with a lot of chatter. Instead, he filled the screen with images that would become part of our cultural lexicon: the mad scientist and his neo-gothic lab, the hunched assistant, and a rigidly lurching monster. Of course, Whale had talented help: Herman Rosse created striking, Expressionist-influenced sets, including the fantastic tower laboratory with the out-sized electrical equipment that’s now all-but mandatory for movie mad scientists; Universal’s resident make-up genius Jack Pierce created the creature’s trademark look by requiring Boris Karloff to endure hours of make-up each day; and of course Karloff himself – up to then a little known character actor – gave an extraordinarily nuanced performance as the tormented and bewildered creature.

In little more than an hour, the movie tells a complex and engaging story. If all you want is action, you won’t be disappointed. But there’s also a powerful story with the pathos of abandonment and the cosmic sin of man playing God. Whale skillfully interchanged moments of subtle beauty and dreadful horror to build the story to an inevitable, tragic climax. Even as you’re terrified by the Monster, you also root for him.

A small group of people come together in a sinister looking old mansion for the purpose of investigating strange and lurid tales about the place. They include the probable heir to the estate, a psychic, an anthropologist who’s leading the effort, and a troubled young woman whose sanity seems less than certain. They have little in common, but soon all seem to feel the house’s clutch tightening around them.

Director Robert Wise, who is arguably best known for the decidedly non-horror “The Sound of Music”, had worked early in his career with Val Lewton and admired his theory of horror: people are more afraid of the unknown that what they can see. So there is no blood or gore in “The Haunting”; no lurching, growling monsters or maniacal scientists.

Instead, sets with heavy rococo decoration and the then still rare movie element of ceilings literally close in around the actors and viewers to create an intensely claustrophobic atmosphere. Stark lighting and the B&W cinematography impart a sense of foreboding. Unusual and off-kilter angles, distorted views and very long tracking shots suggest delirium. Quick cuts disorient. There’s little sense of direction or proximity within the mansion, inducing a feeling of disorientation. Day and night seem to run into each other. And against all this backdrop of unease and upset, the small cast is extraordinary. Julie Harris, especially, gives a performance of such intensity as Eleanor (the troubled young woman) that she seems to truly border on insanity, and this is pivotal in creating the quicksand foundation of uncertainty that leaves viewers frighteningly unsure if they are falling into a supernatural abyss or sinking into madness – or both. And Claire Bloom’s performance contributes to the sense of dislocation in a unique way: She plays Theodora, who the story unmistakably implies is a stylish, feminine lesbian – a kind of character that was decidedly unfamiliar in major studio films of the era. If the original shock value of this character does not resonate with modern audiences, there remains an unmistakable undertow of sexual tension between Theodora, Eleanor and the male anthropologist who’s leading the investigation into the bizarre mansion – and in the hot house, kaleidoscope setting, it adds another dislocating note.

The result is a movie that Martin Scorsese and Steven Spielberg, among many others, have called one of the scariest films of all time.

The original marketing tag line for “The Haunting” remains as apt today as when the film premiered: “You may not believe in ghosts but you cannot deny terror!”

The Loew’s is wheelchair accessible.

(Thanks to Photofest Inc. for providing the photo.)