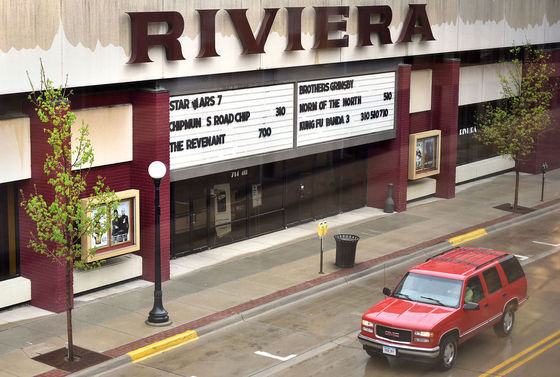 Riviera 4 Theater owner Eric Hilsabeck announced the closing in a letter posted on the theater’s Facebook page. As a show of appreciation to its customers, movie-goers were admitted free on the final day to its films, which included “Batman V Superman: Dawn of Justice” and “Kung Fu Panda 3.”

Hilsabeck cited shortened release times between first-run movie theaters and video-on-demand services as a primary reason for the Riviera 4 closing.

“Previous to this change, we were guaranteed that our distribution window would be free from any other form of competitive distribution,” he said in the statement. “However, over the last two years, our release window has dissolved almost completely.”

The Rivera was the last second-run theater operating in Iowa, he said. The shortening of the distribution window, he predicted, would force the closure of all remaining such theaters worldwide.

Earlier this year, Hilsabeck told the Journal that the Rivera 4 was looking for new options with the property facing foreclosure.

In the Facebook page statement, Hilsabeck said options are still being sought for the building, but nothing would prevent the theater’s closing.

In the statement, Hilsabeck thanked and recommended Security National Bank for “their receptiveness to small business owners in Sioux City.”

Security National Bank had earlier asked for a judgment of foreclosure and sale of the property at 714 Fourth St. to repay nearly $400,000 in loans the bank said Hilsabeck and Beck Theatres had defaulted on.

The city of Sioux City and a Delaware company also had taken legal action to recover money loaned to Hilsabeck.

The Riviera closed as a first-run movie theater in the 1990s. Hilsabeck reopened the Riviera as a second-run theater in 2004 after the building had briefly housed a night club.

Hilsabeck and Beck Theatres purchased the Riviera property for $300,000 in 2008, according to city assessor’s records. The land and building are currently assessed for property tax purposes at $408,600, according to the records.

In 2009, the theater was renovated to increase the number of screens from two to four. In October 2008, the City Council voted 4-1 to loan $20,000 to Hilsabeck to help with the renovation. Notice of default on that loan was sent to Hilsabeck in August, and court records show a current outstanding balance of $22,155. The city has turned the debt over to a collection agency.

In his statement, Hilsabeck said the Riveria was “significantly negatively impacted by a neighboring city-financially backed, movie theatre.” The reference is to Main Street Theatres' Promenade Cinema 14, which leases space in an entertainment and retail complex less than a block away at 924 Fourth St. California-based Civic Partners built the $13 million complex in 2001 with millions of dollars in tax incentives and loan guarantees from the city of Sioux City and promised to fill it with restaurants, bars and shops. The 14-screen movie theater opened inside the building in late 2005, but nearly all of the remaining 12,000 square feet of retail space remains vacant.

“When the city of Sioux City co-signed a loan for a new movie theatre to be placed downtown next to the Riviera their intent was to grow the downtown economy. However, once the building owners (Civic Partners) did not repay the loan and the building went into foreclosure, it became a financial obligation to the city,” Hilsabeck said in the statement. “An obligation that would ensure the dominant business within that building (Main Street Theatres) could not leave and cannot fail.”