Malibu, CA - Malibu Likely to Lose its Only Movie Theater 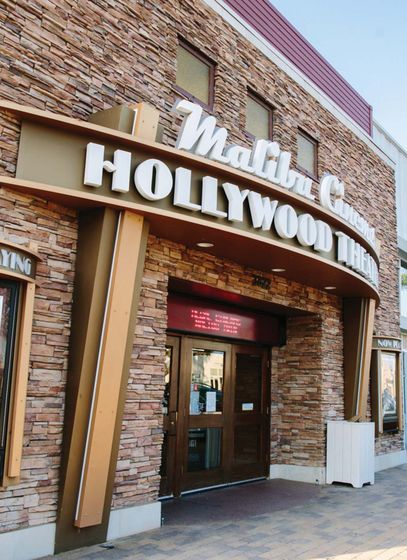 From The Malibu Times: Sources say the days are numbered for Malibu’s only movie theater, the two-screen Regal Malibu Twin located in the Malibu Village shopping center — which is a big deal in a town where so many residents work in the movie biz. The 25-year lease the movie theater had enjoyed expired at the end of 2016, and the space will be operating month-to-month until at least the end of June.

In an attempt to rent the space to another movie theater chain, management of the Malibu Village, Jamestown Property Management, has made the contacts, but in the current market, their hands are tied. They say the existing space is simply too small for potential tenants to make any profit, so they’re not getting any bites. The business model for today’s film exhibitors is based on large multiplex or megaplex theater complexes.

“We’ve reached out to a number of tenants in the theater space to replace Regal and there has not been any serious interest given the challenges of operating a small movie theater,” a spokesperson for Jamestown said. “In the meantime, we have reduced Regal’s rent by 75 percent in order to keep them from leaving immediately.”

Jamestown went on to explain, “While the Malibu community does support the theater, Regal has determined that the current business model isn’t financially viable. They don’t get enough patrons and haven’t seen a payback for putting in amenities like reclining seats, new projection equipment, and beer and wine service that many competitor theaters have installed to continue attracting customers.”

Size is likely the issue.

“Movie theaters typically require a minimum of 15,000 to 25,000 square feet to accommodate more screens and more amenities like better concessions and larger seats,” Jamestown added. “The current space, which is only 4,000 square feet, does not allow for this, and Jamestown does not have the development rights to add to the existing square footage.”

Jamestown is more than aware of the public relations problem it may have on its hands at the departure of a popular community-serving business. With no movie theater in town, residents will have to drive at least 40 minutes to get to another movie theater. In addition, if the theater is replaced by another Rodeo Drive-type retailer, it would add fuel to the fire of the local movement to have more control over commercial real estate via a city chain store ordinance along the lines of Measure R.

Acknowledging the problem, Jamestown said they are “committed to finding the right fit for a new tenant for the space — a business that fits within the fabric of the community.

“We are talking widely to the market and are looking at creative options,” the spokesperson said. “Our track record of keeping local businesses like European Shoe Repair, Colony Cleaners, Marmalade Café and the forthcoming Malibu Burger Company, and attracting original businesses like Saje, Objects With Purpose and Kamsah, as well as businesses that serve the local population like Marine Layer, speak to this effort.”

David Lyons, who managed Malibu’s theater from the local and corporate levels when it was still run by Wallace Theater Corp. (later known as Hollywood Theaters), said in a phone interview that Malibu had the “least-highest revenues” of any complex they had, but that it set the pace for the rest of the chain’s theaters.

“Even though I was involved with 700 screens in 13 states, the film conversation started every Monday with what was happening in Malibu, because of its high concentration of industry professionals,” Lyons said. “Unfortunately, to be successful today, you need eight to 10 screens. It’s not in any chain’s interest to operate a small theater in a competitive environment.”

Fortunately, the impending loss of the theater doesn’t mean the end of movies on the big screen in Malibu. The success of the local Malibu Film Society means that residents do have another option for seeing first-run films. MFS’s Malibu Screening Room, which operates from about September to April each year, shows more than 60 films per year, including numerous sneak previews and nearly all of the top Golden Globe and Academy Award contenders.

You’d have to think that if Regal pulled out, a company like Regency Theatres would go in.

Say goodbye to Regal and get Drafthouse Cinemas to open up.

Regency is the patron saint of shuttered LA theatres. Would not surprise me if they picked it up.