Houston, TX - In the Age of Streaming, How Houston’s Cinemas Keep You Going to the Movies 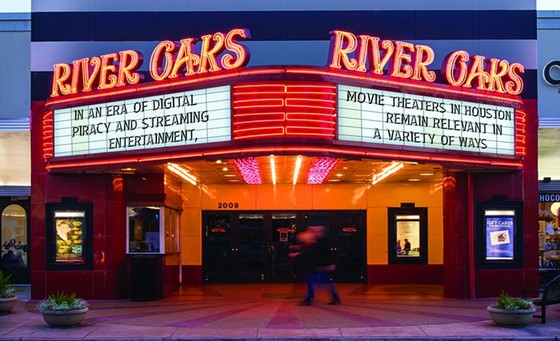 From the Houston Press: In July 1999, the River Oaks Theatre had the honor of exclusively hosting The Blair Witch Project for two weeks. Lines snaked around the building for an endless stream of sold-out shows. People began trying to sneak their friends in through the exit. With too many people and not enough seats, a minor riot ensued.

Then-general manager Rob Arcos and the rest of the staff ended up barricaded in the office while the cops escorted people out. Artisan Entertainment eventually sent the various Landmark Theatres staff T-shirts saying “I survived The Blair Witch Project,” as thanks for handling the two weeks of insanity.

Ah, those heady days when going to the movies was still a must-do experience. Nowadays, confronted with streaming entertainment and digital piracy, Houston theaters are finding new best strategies as they try to hold onto their share of the market and remain relevant.

Just after David Bowie died suddenly, at the beginning of 2016, cinemas all over the country packed mourning fans into seats to swoon for the dearly departed Goblin King in Labyrinth. Ditto for Prince and Purple Rain when His Royal Badness also left us. Following last week’s death of Star Wars actress Carrie Fisher, Alamo added on-screen tributes to screenings of Rogue One (and scheduled a lightsaber vigil in which people were asked to dress up as Star Wars characters and bring along lightsabers, glowsticks or flashlights). Arranging these memorial screenings is part of Saucedo’s job as program director of Triple Tap Ventures and franchise holder for Alamo Drafthouses in Houston, Lubbock and El Paso.

“People like to go and pay their respects to their heroes on the big screen,” Saucedo says.” When Gene Wilder passed away, we had to add four or five screenings of Blazing Saddles just to keep up with demand.”

Saucedo is no novice when it comes to making the moviegoing experience personal and unique. He owes his position to Alamo Drafthouse’s going out of its way to reunite the cast of the 1987 horror-comedy The Monster Squad for a screening he attended. Growing up in McAllen, Texas, addicted to tapes his sister would bring home from the Blockbuster where she worked, he’d never seen a movie theater do something like that.

“I didn’t think anyone else even knew about that movie,” he says, “let alone enough to sell out an entire theater just to see it.”

After graduating from college, Saucedo pestered the chain’s managers until they created an accounting position for him. He moved on to programming in Houston, where in addition to first-run movies he’s done everything from giving Houstonians a chance to see the supposed corpse of Bigfoot to having live alligators at a screening of Alligator. Still, for all the razzle-dazzle, these events are more marketing than box-office moneymakers.

“We’re not making much on special events,” says Saucedo. “They bring in business on a slow night and give journalists a reason to talk about us. We’re just hoping that they have an amazing time, and so when they’re choosing a place to see Star Wars or Dr. Strange, they’ll choose us.”

Cinemas have had to adapt considerably to compete with other avenues of entertainment. HDTVs and Blu-ray have brought a pretty impressive facsimile of going to the movies into people’s living rooms at fairly affordable prices. Among the best things happening on screens are Netflix shows like Stranger Things and the Marvel series, which are available at home instantly, and many of the independent movies that used to fill up the small screens in multiplexes are now available at Video on Demand the same day they show up in theaters. Eighth-generation video game console titles rival Hollywood blockbusters in appearance and scope. That’s not even accounting for the piracy of new releases. In 2005 the Motion Picture Association of America estimated it was losing $3 billion (out of $10 billion) in box-office sales to piracy. Why go to the movies at all?

Saucedo points to things that going out can do that staying home can’t. His personal favorite is a screening of Shakma, a famously insane horror film from 1990 about a killer baboon driven homicidal by an experimental drug.

A similar cinema acolyte is Arcos, former general manager of both the River Oaks Theatre and Sundance Cinemas, as well as the owner of Montrose’s last great video-rental location, Movies the Store. He grew up watching films from a local video-rental store while his mom worked, and then went to work for an AMC dollar theater. An ad for Rushmore, playing exclusively at the River Oaks, changed his life.

“Who hasn’t had that experience?” says Arcos. “You walk into that space and you’re transported to another time when going to the movies always looked like that. The film broke, and I ended up outside the projection booth bothering the manager while she dealt with a brain wrap [a 35mm-film threading accident]. I just sat in the lobby until I could apply. It was just being in that venue.”