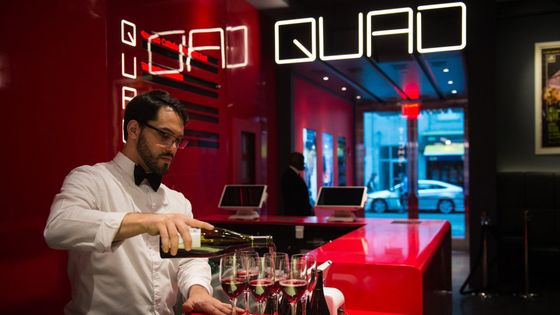 From AM New York: An art house icon returns to business in a spiffy new form when the Quad Cinema reopens Friday at its West 13th Street location. After a massive two-year renovation, the return of the Greenwich Village institution, which first opened in 1972, marks the latest highlight in what has become a golden moment for New York City cinephiles. The past several years have seen an explosion in specialty cinemas across the city, from the Nitehawk in Williamsburg to the Syndicated in Bushwick to the Metrograph on the Lower East Side and more.

But there’s something about independent and foreign movies and the Village that just seems right, said Andrew Berman, executive director of the Greenwich Village Society for Historic Preservation. “The Village has changed a lot, but it being a center for independent and foreign films remains the same,” he said. The Quad was Manhattan’s first multiplex, and it has a long history of showcasing significant filmmakers such as John Sayles, New York icons like Andy Warhol and revivals of classic foreign movies. The theater hadn’t aged well in recent years, but it maintained a loyal fan base. Chief among the loyalists was developer Charles Cohen, CEO of specialty film distributor Cohen Media Group, who bought the theater in 2014 and spearheaded the makeover. “People want to return to film going as a social experience and not a solitary experience,” Cohen said. “In an over-connected society, the opportunity to connect with people in a community experience is going to be welcomed.” The four screen, 430-seat theater has a new marquee and a lobby filled with digital screens, vintage posters and a 21.5-inch video wall that will show clips from old films. A separate wine and beer bar section, with brightly lit tables and chairs, and a concession stand that serves several items including coffee from around the world, will tide over viewers before each show. The theater is equipped to play every conceivable format, including 35 mm, 16 mm, 4K digital and 3-D. Cohen promised that the Quad’s programming will reflect the neighborhood’s interests, and he’s attracted top talent to oversee that vision. Christopher Wells, who has programmed at the IFC Center and Anthology Film Archives, is the Quad’s director of repertory, while Gavin Smith, formerly of the Film Society of Lincoln Center, is senior programmer. Wells stressed a commitment to classic programming “every single day of the year.” The theater opens with a Lina Wertmuller retrospective, in addition to first-run releases “Heal the Living,” a French film, the Emily Dickinson biopic “A Quiet Passion” and more. It might seem like the market has been oversaturated in the Village, given that the IFC Center is pushing an expansion and the Film Forum, Cinema Village, the Angelika and others are still going strong. But Berman believes competition among the theaters strengthens the community. “There is definitely a synergy in the Village between the small institutions like this,” Berman said. “It creates an environment where they can thrive.”

Wow great ideas. This is greatly amazing! Thanks for sharing. armorservices.com/

I will visit this cinema when I get to New York! move out cleaning service norfolk va

The auditorium hadn’t matured well as of late, yet it kept up a faithful fan base. paper.io download

I am planning to visit here! emergency cleaning virginia beach

Glad to see this post, would recommend this site to my friends. tree services

A must place to visit, I hope to be back here soon. Central Albert Towing

You are one straightforward writer. I enjoyed reading your article and taking in all the interesting information. I share your thoughts on many points in this content. cornice sydney

This is really amazing. The information is great and I learned something new. Thanks for sharing! click here

Thanks for sharing here a great content. SAM Renewals

Thanks for sharing! Towing Durham, NC

Thanks for the info! Roofing Charlotte, NC

Thanks for sharing :) Hickory Towing

This a great info and article! I will go there sometime. www.concretecontractorstuscaloosa.com

Following a gigantic two-year redesign, the arrival of the Greenwich Village establishment. montgomerycountytree.com/about-contact

Thank you for this! funding for flipping houses

Thanks for this awesome post you shared. office depot little rock

Thank you for this! move out cleaning checklist

This is one of the must-visit places in New York :) official random number generator

Wow! That’s nice place to visit. I’ll include this in my bucket list.

Thanks for keeping us here posted with awesome one. kitchen remodeling contractor

I have not been here. I wanna go there to relax and drink wine.

Thank you for this post. I found it helpful. Appearance Counsel

Thanks for the insight. Post Hospital Care Corona CA

Love to go there for a drink. Nice place. Regards, Team claytonroofingcontractor.com

Please keep this page updated because I’d love to read more of this. walls guymon

I hope the plastering is done properly.

I really enjoy it. Thanks for sharing. - Columbusgatreeremoval.com

Thanks for this great post you shared here. kitchen remodeling contractor

I will visit this film when I get to New York! real estate staging

Wow, this is amazing! restaurant loans