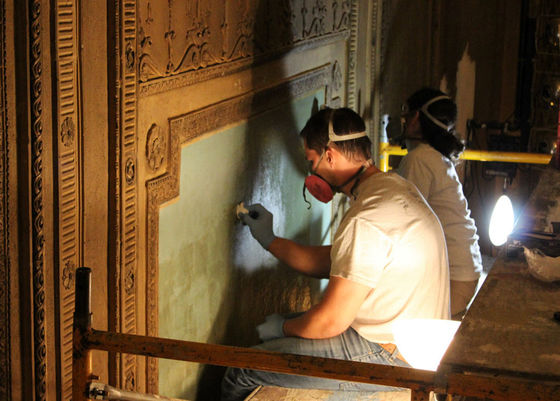 From the Salamanca Press: The light at the end of the restoration tunnel is visible at the Historic Hollywood Theater.

It has taken more than 20 years and lots of work from volunteers and craftsmen to get the the theater into the condition it is today at 39 W. Main St.. A family-owned Buffalo restoration company, Swiatek Studios, has restored the ceiling and portions of the walls of the 990-seat theater, including a 22-foot convex dome at its center of the ceiling. The dome changes color on a ceiling that took the company four months to clean and preserve.

Some of the walls have been restored as well, including plaster mouldings, rosettes and other decorative pieces.

Built in the late 1920s, it was designed in 1926 by Leon H. Lempert & Son, a Rochester architectural firm, that was “one of the most renowned theatrical designers of their day,” said Deb Harris, project coordinator.

Olean had four Leon Lempert-designed theaters at one time. The last one, the Palace, was demolished in 1988 to make way for a Rite- Aid pharmacy.

In January, Lt. Gov. Kathy Hochul gave a State of the State Address in the theater as guests sat on metal folding chairs. Those chairs will be replaced with replicas of the original seats, of which there were 700 on the floor and 290 in the balcony.

Brett Swiatek of Swiatek Studios and another conservator have started work to clean and preserve two oil painting murals on the side walls of the theater. Scaffolding covers the first one on the left side of the theater.

There are decades of varnish, oxidation and smoke covering the paintings, which are by an unknown artist, Swiatek said. It may take eight to 10 weeks to restore them.

“You remove it layer by layer,” he said. Different products are used to remove the various materials on the painting.

After the murals are cleaned and restored, a conservator-safe varnish will be applied. The project was made possible by a $14,800 grant from the Community Foundation of Greater Buffalo, Harris said.

Swiatek said he has always been involved in restorative art with the three-generation specialty business.

“It’s an extreme challenge,” he said, surveying the theater from the base of the scaffold.

“Something this important to the community, you kind of take personal ownership and treat it as if it were your own,” Swiatek said.

After spending three to four years involved in the Hollywood’s restoration, “you can’t help but become a little emotionally attached with a project like this,” Swiatek told the students.

The Gowanda Area Redevelopment Corporation still needs to raise $219,000 to tap into the last $1 million worth of grants.

The art classes are looking for a project to help raise funds for the Hollywood, the teachers told Swiatek and Harris, who had led the class on a tour.

Swiatek suggested they create some original art with elements of the theater that could be auctioned off at a future fundraising event like the upcoming Hollywood Happening June 2 to 4. This fundraiser has raised hundreds of thousands of dollars for the theater’s restoration.

“It should be engaging,” Swiatek said of the artwork. “Things that provoke thought are intellectually engaging. Create something you will be proud to put your name on.”

It’s not too late to volunteer, Harris emphasized.

The building closed in 1992 and was purchased five years later by the Gernatt Corp., and donated to the Gowanda Area Redevelopment Corporation.

“We’re very lucky,” Harris said. “The theater was intact. It wasn’t striped and items sold off.”

For more information on the restoration of Gowanda’s Historic Hollywood Theater, go online to www.gowandahollywoodtheater.com. 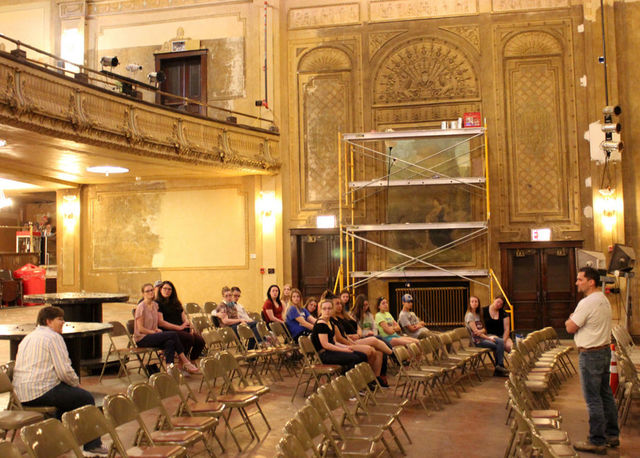 useful and interesting article, found a lot of useful information, glad to join your community! 192.168.1.254