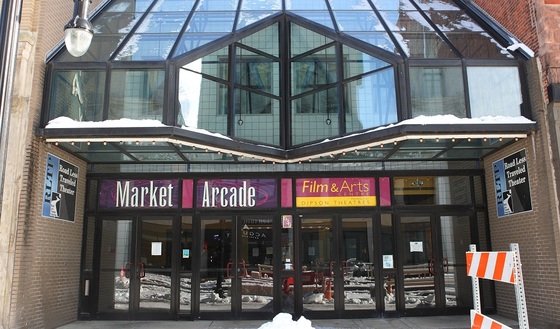 From the Buffalo News: After more than a three-year absence, Buffalo will once again get a downtown movie theater.

“We think having an eight-screen, state-of-the-art AMC movie theater will make downtown Buffalo and the City of Buffalo an even more attractive destination for people living in the city, and living throughout the region,” Mayor Byron W. Brown said. “It will bring more excitement to the Theatre District, and more people who will patronize the various businesses and shows.”

The Benchmark Group announced in September 2014 that the Leawood, Kan.-based circuit had signed a letter of intent to open a movie theater. But a change of theater company executives after negotiations were well underway contributed to the 35-month delay, Benchmark officials said. AMC’s concerns over adequate parking, and the chain’s unfamiliarity with opening in an urban setting were also factors.

“I always wondered when the AMC theater was going to happen, so this is good news,” said Brad Davis, who lives in the Sinclair apartment building on Washington Street. “Seeing downtown change has been pretty exciting. It feels like it’s going to be a really exciting spot here in the next three or four years.”

Benchmark will spend $5.5 million and AMC $3.5 million to overhaul the theater.

A new roof and facade and lighting improvements will be made on the outside of the building, along with new signs that front Main and Washington streets.

On the interior, reclining seats will be installed and sound and projection systems modernized and new carpeting installed. There will be new bathrooms and concession area, updated mechanical systems and improvements to three floors of office space.

“AMC wanted all of the latest features to be there,” said Martin J. DelleBovi, executive vice president with the Benchmark Group. “They are going a long way to make sure this is a wonderful facility. People will be proud of it when it’s done.”

Benchmark was anxious to acquire a tenant at the downtown site. The company acquired the two-story building, which also houses Bijou Grill at 643 Main St., and a commercial building at 628 Washington St., for $250,000 in Feb. 2016 from the Buffalo Urban Renewal Agency.

The developer said the project would never have happened without the perseverance of the Brown administration and M&T Bank, and the help of developer Nick Sinatra, who owns the Market Arcade Building next door.

DelleBovi said the increase in night-time options played a role in convincing AMC to be in downtown.

“Their operations people came into town and stayed at the Hyatt Hotel,” DelleBovi said. “They could not believe how vibrant downtown was.”

Peter Durant, who lives in Ellicott Commons, blocks from where the theater will be, said a movie theater is the kind of amenity residents want.

“I think it’ll enhance the area a little bit better,” Durant said. “It’ll be a nice feature, especially the way downtown is growing.”

“I love the fact that my sons’s friends can come over and, instead of it being a 20-minute drive to a movie theater, they’ll have a three-block walk,” Hamilton said.

The restaurateur also likes how the movie theater will add to downtown’s nightlife.

“Movies drive people to restaurants, and restaurants can drive people to the movies,” Hamilton said, noting that’s been the case when shows are at Shea’s Performing Arts Center, located across the street from the coming AMC theater.

The multiplex was built by the city using a combination of city and federal funds, and operated by General Cinema from 1987 until 1998.

Angelika Film Center moved in that same year, with $200,000 provided by the city to brighten the lobby’s appearance. But the art-film movie house pulled out 11 months later, using a clause in its contract that allowed Angelika to depart if it lost money in consecutive quarters.

But poor attendance and the city’s reluctance to to pay over $400,000 for digital projectors, as 35 mm movie prints were being phased out, caused the publicly-subsidized movie house to close.

The AMC chain has over 8,200 screens in 661 locations. The only AMC theater presently in the area is the Maple Ridge 8 in Amherst. Regal Entertainment Group, the nation’s second largest chain, has five movie theaters in Erie and Niagara counties.

“That is great news for downtown Buffalo,” said Michael Schmand of Buffalo Place, a nonprofit organization that focuses on downtown. “Having a first-class movie theater in your Theatre District for visitors and the people of Western New York is wonderful news.”

Benchmark will spend $5.5 million and AMC $3.5 million to overhaul the theater-With this figures, I expect some extra ordinary renovations same as the one done in bathroom renovations canberra during the early 2000’s.

To do this physics homework helper you can turn to the Internet for help by entering the discipline and your locality in the search bar. Be guided by positive reviews and recommendations in the final choice.

I needed to thank you for this incredible read! I like each and every piece of it. Tampa mold removal services is interested in doing great service.

Wow! This makes my heart so happy. The location will surely drive more people to go. Our therapeutic massage Tampa team, is excited!

Thank you for keeping us here posted with great content. coffee machine repair

I can set up my new idea from this post. It gives in depth information. Thanks for this valuable information for all,https://www.carefulmovers.net/storage

Good thing is that they’re back. AMC follows area mandates and meets or exceeds CDC guidelines. Masks are recommended for everyone regardless of vaccination status. maths is a difficult subject to teach

This is a piece of good news. We are looking forward to the opening of this theatre. Bathroom Renovations Doncaster

Goodness! This makes my heart so glad. The area will clearly drive more individuals to go. Our drywall contractor group, is energized!