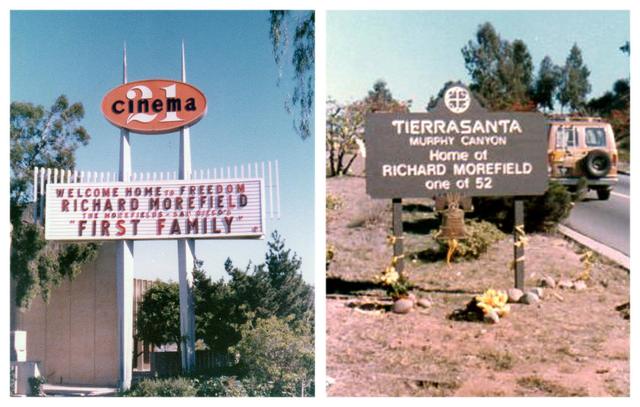 Mann Cinema 21 Theatre, in Mission Valley, celebrated along with the rest of San Diego, California and the country, as the 52 American hostages, including US Consul General Richard Morefield, returned home after 444 days of captivity in Iran. [The hostages were seized on November 4, 1979 when the US Embassy in Tehran was overrun by Iranian student-militants. The militants were supported by Revolutionary Iran’s new, clerical government under the Ayatollah Ruhollah Khomenei. The hostages remained in captivity until the inauguration of US President Ronald Reagan on January 20, 1981.] Photos from Facebook/Vintage San Diego (with appreciation to Joyce Scatolini Madrid): https://www.facebook.com/VintageSD/photos/a.1380997935283465.1073742207.181625028554101/1380998075283451/?type=3&theater

Gregory May commented about Mann Cinema 21 Theatre and San Diego Celebrate the Return of the Hostages from Iran on Oct 29, 2017 at 8:58 am

Thanks for uploading my photo.