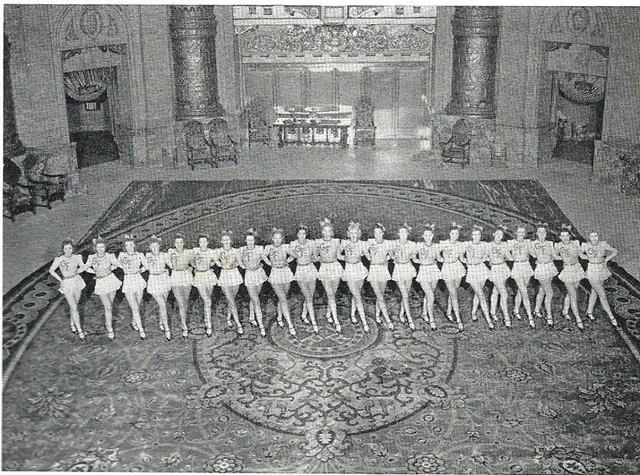 The Roxy dancing girls on the gorgeous oval carpet in the magnificent Moorish Foyer of the New York City Roxy Theatre on opening day 1927.

On closer examination this photo was NOT taken on opening day, 1927. The girls, 22 of them, have GF on their costumes, signifying Gaye Foster. The Gaye Foster troupe began appearing at the NY ROXY after the departure of Rothafel during the mid-1930’s. The 32 Roxyettes moved over to Radio City Music Hall with Rothafel in 1932-33. The Roxyettes line was increased to 36 and later re-named Rockettes.

Gae Foster began her tenure as director and choreographer at the Roxy in 1933. The Gae Foster Girls were famed for their precision routines and for balancing on large wooden balls, bicycles, etc. This photo is interesting. It shows the original rug and drapes in the rotunda, but rubber mats have been added at the perimeter of the rug. The Roxy was massively redecorated in the early 40s and the rug was replaced by carpet. I’d guess this is from the mid-1930s.

No line of precision dancers appeared opening night. It was not until October 1927 that “Russell E. Markert’s 16 American Rockets” were booked for a one week run. They of course eventually became a permanent attraction as “The 32 Roxyettes”.