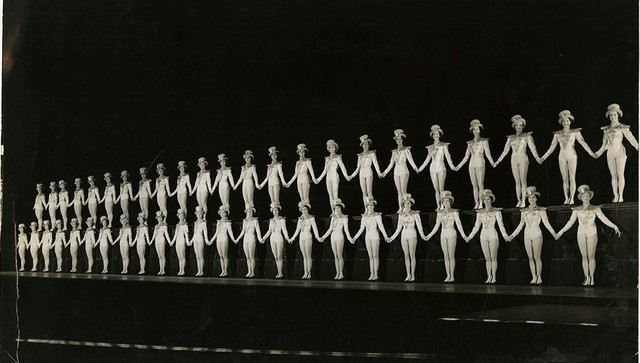 Not sure if this is ‘37 or even the Rockettes.

The Music Hall opened with 46 Roxyettes which is the number here.

Not sure when the number was cut by 10 and the name change took place.

Definitely Rockettes. Originally there were 32, then called Roxeyettes. After Move from ROXY Theatre to Music Hall, the line was increased to 36 because of wider stage. There were never more than 36 performing on stage at one time.Later, after Rothafel’s departure from Music Hall, the line was re-named Rockettes. The additional 10 in photo were used as substitutes as needed.

Thank you. So this could then have been a publicity photo with all the Rockettes including the substitutes. I do know there were always an additional 10 beyond the 36 one saw on stage until the line was cut to 30 in the 70s.

Looking for photos/information on a Roxyette dancer for her daughter. She’s not sure what years she danced, but I would think late 30’s. I’m wondering, Joseph, if any of your photos list names of the dancers. Thanks!