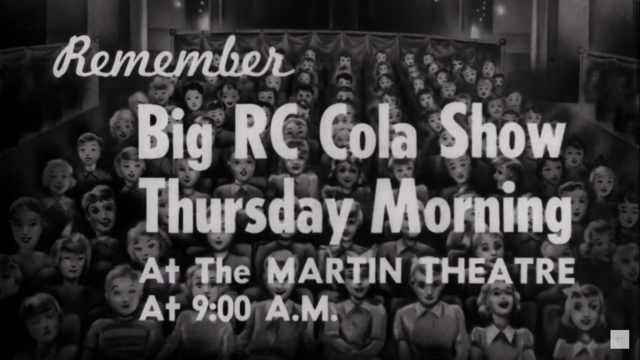 We love RC COLA®!!! Not to many theatres carried It in the SF Bay Area. Most had Coke®. All the Fox West Coast Theatres carried Pepsi® in the 1960’s. It was trouble when someone came up to the Fox Oakland candy counter and ordered a Coke® then we had to tell them we serve Pepsi® only. The Coke® people sent checkers out to all the Fox West Coast Theatres and did a Coke® buy in the 1960’s and 70’s. The funny thing was all the theatre managers called each other when they new a checker was in the area so we had pre warning they were coming. We had some dishonest Fox managers like MR Jack Mc Dougal at the Fox Oakland as he got a commission on all candy drink sales. When the Pepsi® people came to deliver the syrup tanks each week they always checked the flow rate of syrup on the nozzles. After they left Jack went in with a screw driver and turned the syrup level way down. We had so many people complain they just tasted flavor cola water! We told them to complain to the manger then he had the nerve to tell them he would call Pepsi® but he never did. RC Cola still makes a great can diet RC Cola® and they don’t use the junk Coke® uses as a sugar substitute. It’s very hard to find in the stores as they are filled with the same two brands and their offshoot flavor waters some loaded with sugar. Thanks 50sSnipes for this trailer clip for RC Cola®

I was just thinking these old 35mm candy counter clips only had a all white audience in the ads in the 1940’s 50’s that National Screen Service® or Filmco® made. I wonder if the Negro movie theatres in the USA had a different look in the background and had some people of color in the concession trailers they ran? You would never see also any Chinese or Japanese kids or adults in the background of these animated or photo still moving letters short commercials.

My friend Bill projectionist theatre owner and trailer king told me the company that produced most of these ads was named FILMACK® still run and owned by Bob Mack. A few years ago he was even selling his 16mm & 35mm movie theatre short snipes.