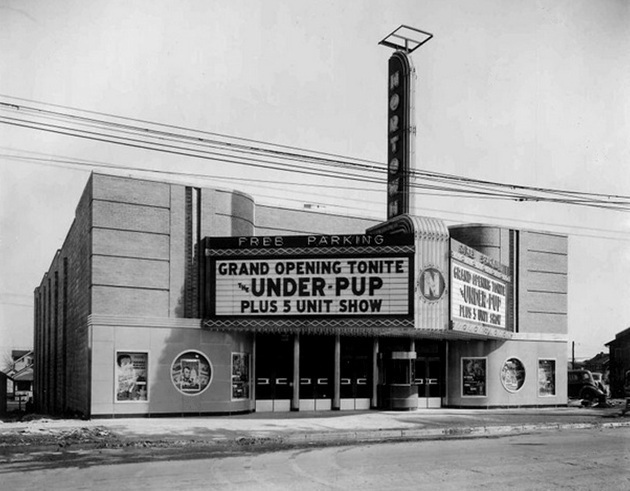 The Nortown Theater opened on February 23, 1940 with Robert Cummings in “Under-Pup”. It was designed by architect C. Howard Crane. It was closed in 1966 and has since been demolished to build health offices on the site.

From the mid-1950’s through the mid-60’s, my family lived in the country, about 30 miles northeast of Flint. Whenever we’d come to visit my grandmother, who lived near Saginaw St. at E. Van Wagoner, two or three of us kids (or more, if we brought friends) would be dropped off at the Nortown theater. We’d pay 35 cents for a double feature and in those days the popcorn and drinks were much more reasonable than today. Later, as we grew, we’d walk the distance to/from the theater and grandma’s house. I saw a lot of double features as I was growing up and I have fond memories of the place. Thanks for being there when I needed you, Nortown!

I was manager of the Nortown from, approx 1949 thru 1956, when the original owner died.My years there were some of the best because of the people working with and for me. Sadly, many are deceased but I have often wondered if any survivors, out there, might be interested in communicating or getting together for a dinner or pizza?
I am now eighty years olde and would like to relive some olde memories with you and swap some scuttlebutt.
Sincerely
Frank A. Phillips, former manager, Nortown Theater/Flint, Michigan

Frank,I hope some of your old gang comes together,We have been able to keep tabs on many of our ABC THEATRE and PLITT THEATRE employees here in Augusta,Ga.About once a year 10 or 15 will gather for"OLD DAYS".I hope more Ex-theatre people are doing this.Because now with these lousy 20 plexs no one knows any one anymore you can bet on it.

Mike Rogers is absolutely right and bigger is not always better. At The Nortown I had something like 30 people working and I got to know all of them and appreciate them for who they were. Some of the multiplexes, nowadays, try but big is not always better.
I work as projectionist at the Flint Institute of Arts in a change-over booth and we have an open door policy for comment and merely curious. Great way to get to know people.
Frank A. Phillips, Nortown Theater, Cinema Hollywood and Flint Institute of Arts

Frank,thanks for all you have done to make Motion Pictures one of Man’s greatest inventions.And To all of you theatre Managers of the PAST.

The building has been torn down for health offices.

I was very young when I used to go to the Nortown with my aunt and grandmother. The theater used to give away free dishes, a plate a week to all of the patrons. I was around five or six and I would get one too. Later in life, I would go to see a film now and then. It had a large auditorium. When I was a kid, I used to play on the carpet with a small model car. I didn’t care about watching any movies. There was a large fish aquarium in the lobby and I used to watch the fish most of the time, until the usher would tell me to sit down.

I recall there was limited parking and when I went the parking lot was dusty and not paved or tarred. I enjoyed the theater and hated to see it closed. Those things inspired me and I went to Hollywood when I was around 18 and worked at Grauman’s Chinese theater. Later I would work for Butterfield theatres and managed the Flint Della and worked in Battle Creek at the Michigan It is so sad to see all of the 8 Butterfield theaters in Flint closed, except for the Capitol. They just received a grant to renovate it. I will add a photo of the Nortown here in a few days. Yes, I worked at all 8 of the Butterfield theaters too. Flint was fun to grow up and work in. I may open a mini theater there this year, members only.

Boxoffice, April 30, 1962: “The sale of five theaters … to new owners was announced by William Clark of Clark Theatre Service, who is taking over the buying and booking of films for all five. The new owners and their acquisitions are: … Harry Greenbaum, Nortown Theatre, Flint, from Ed Johnson”