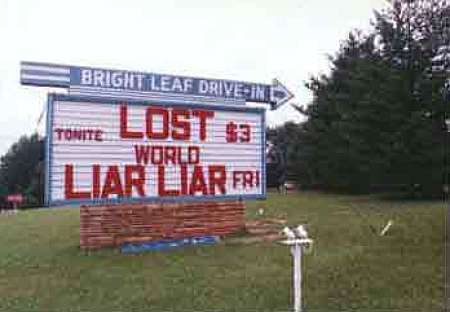 The Bright Leaf Drive-In opened in 1955. This single screen drive-in has a capacity for 150 cars.

The Bright Leaf Drive-In was closed suddenly in March 2010, when the lease of the land ended.

Such a sad note! The bright leaf was named for the tobacco leaf grown in Surry County.

Gentle Patsy, that item was from 2010 and was posted last year soon after it was published (see above).

I’ve been researching some old newspaper listings from Mount Airy. This drive-in has a lot of history, shame it had to close. In the early 70’s, you could arrive at dusk and watch a total of five movies running late into the wee morning hours. Usually a couple of family films to start things off, then more soft core adult fare like ‘The Van’ or ‘Cheerleaders’… To close the evening on a classy note, the drive-in would conclude with popular hardcore titles such as ‘Johnny Wadd’ or ‘Deep Throat.’ In the 80’s, the drive-in had a popular $20 drawing on Saturday nights, free entry. Often in the spring, they would announce ‘The first 20 cars get a FREE WATERMELON!’ Star Wars was a huge deal at this drive-in when it arrived first run (as with every other theatre/drive-in in the country that carried the film upon it’s release ;–) Managers reported that cars were lined up and down Highway 52 just praying for entrance to see the blockbuster on the drive-in screen.

Sorry to continue on with my obsession with this particular Drive-In, but I’m finding some really interesting information in my research. In the June 18, 1990 issue of ‘The Mount Airy News’ there is a great interview with owner Don Davis and long-time employee Clyde Raines. Don says that one of his favorite aspects of the drive-in experience was the contests he held over the years. One year,on the Fourth of July, Clyde was holding a drawing for a pony. The man who won came to the ticket box to claim his prize, and Don informed him that the pony was tied to a fence post by the entrance. The man came back and said their was no pony out there. The pony was never found! Also, the Bright Leaf was actually built and had it’s first day of operation on August 11, 1950. The drive-in was named by Mrs. Ruth Park of Route 4, Mount Airy. She won a $10 prize and a month’s attendance for coming up with the name. The new highway 52 was being built through the land where the drive-in sat, so it was torn down a mere three years after being opened. Plans to rebuild the Bright Leaf were announced in the Mount Airy News on September 3, 1954 and the drive-in was opened in 1955 at it’s new location, where it sat until it closed in 2010.

This message is for Chuck1231:
I am a reporter at the Aiken Standard in Aiken, SC and I am working on a story about the Monetta Drive-in celebrating its 60th anniversary.
In this article, I’d like to highlight past drive-ins in Aiken and I see you have commented often on many of those drive-ins.
I was wondering if I could have some of your time over the phone to talk to you about what you know/remember/have to say about these drive-ins.
Thank you so much, my contact info is or you can call me directly at 706-284-3498.
Thanks!!

Have a wonderful day!

Ashleey I hope you got the answers to your Questions on your e-mail.

Newspaper listings for this drive-in were always entertaining. Longtime owner Don Davis offered a brief opinion on each film. Thank you for the information Element02, that was an interesting read!

The screen is still standing, but the concession stand/projection booth has been torn down. A man who owns ‘Carolina Carports’ purchased the land and has also had the trees cut down that guarded the screen from people who might be trying to peek while driving down 52 North. A rumor has been circulating that he plans to completely remodel the drive-in and reopen it. Hope this rumor is true :–) So many great summer memories from this place. The best one I have is the summer of ‘92, seeing 'A League of their Own’ here with my grandparents. They fell in love with the movie and we watched it at least a couple of times a year until they passed. Surprisingly, the record-breaking movie to play at this drive-in was ‘Porky’s 2: The Next Day’… Owner Don Davis said that it’s opening weekend there was busier than the original Star Wars!

January 2017 Google Street view shows the screen still standing, but Carolina Carports is an operational business on the lot.