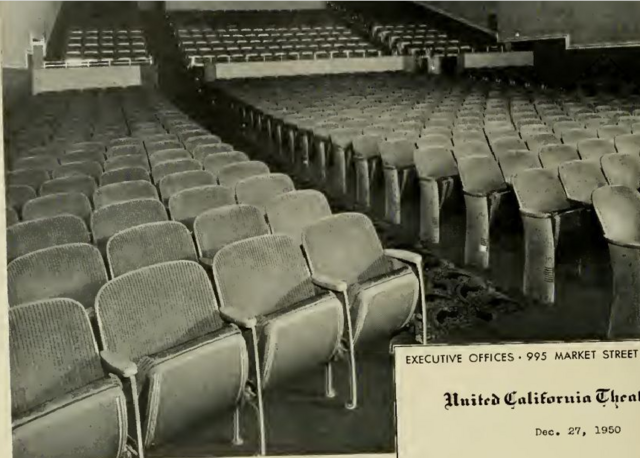 This theatre opened shortly before World War II in the community of Seaside, which appears to be a suburb of neighboring Monterey, but is actually its own city. The theatre’s entrance was at the corner of Broadway Avenue and Fremont Boulevard, with a three-sided marquee. Atop this was a fluted tower, which supported a vertical sign placed at an angle to read from both streets. The box office sat in the center of a yellow and maroon terrazzo star. The maroon color was continued in the tile of the box office, entrance walls, and beneath the rows of storefronts which continued down both streets.

The auditorium was stadium style, its rear portion extending back over the stores which faced onto Broadway. The lobby was circular, with ribbed coves on the ceiling, and a brass and white glass drum-shaped chandelier in the center. The auditorium had smooth walls and a flat ceiling. The proscenium was flanked by quarter-cylindrical pillars housing air vents, and ornamented by horozontal bands with a metallic finish. The original curtain appeared to be older than the theatre itself, depicting a Spanish Lady on the left, linked by a swagged flowered garland to a mass of foliage on the right. There was a small thrust stage in front of the curtain, with steps at each end. Over the front auditorium exit doors were painted scroll motifs. The walls were lined with tiered lotiform sconces.

Not too long after its opening, probably in the late 1940’s or early 1950’s, there was a fire, and the theatre was partially remodeled. The square tower and vertical sign were removed, to be replaced by a comparatively low, concave facade with a rounded top, fronted by a cylindrical tower which served as the new vertical sign. At its top was a small metal tiered feature. The upper part of the Broadway facade was remodeled, removing the five vertical neon fins which it had originally, and replacing these with a smooth coat of stucco scribed with a crosshatched diamond pattern. At the top of this was a flared, horozontally ribbed cornice which held several bands of neon. At this point, the theatre was painted mint green, with yellow trim on the marquee and letters.

In the 1970’s, the Del Rey was given an even larger thrust stage, and hosted live funk and soul concerts. Among the bands recalled on radio ads at the time were the then-famous Ohio Players.

Soon after this, the theatre closed to shows for good. The marquee, box office and sign tower were demolished, the seats removed, and the building became a used furniture showroom. The interior had been painted yellow, with only the horizontal bands flanking the proscenium remining as the sole decorative elements along with a pair of stars in relief, which I would assume were added during the post-fire redecoration.

In the early 1990’s, after the furniture store had left, the auditorium roof partially collapsed. The debris was removed, and the shell of the theatre stood for a short time, but was soon completely demolished. While visiting the site, I noticed that a small section of the terrazzo sidewalk remained. I happened to have a permanent marker in my pocket, and I wrote “R.I.P. DEL REY THEATRE” on the remnant. As of 2005, the property still remains an expanse of unbuilt-upon sand.

Does anyone have any photos of this theatre?

You might want to check the Archives of the Theatre Historical Society of America:
www.historictheatres.org

This property is being developed. I was recently contacted by representatives from the development company who were interested in doing a display on the theatre in the new project.

A sample picture of the DelRey from the Pat Hathaway collection. In Color!

Only time I ever went in teh place was when it was an antique store. It was like Carlsbad Cavern, huge dark cold and scary. I bought a locket from the candy counter where the jewelry was displayed.

Is there any info about it’s past owners. I was told my grandfather owned it in the 1940’s