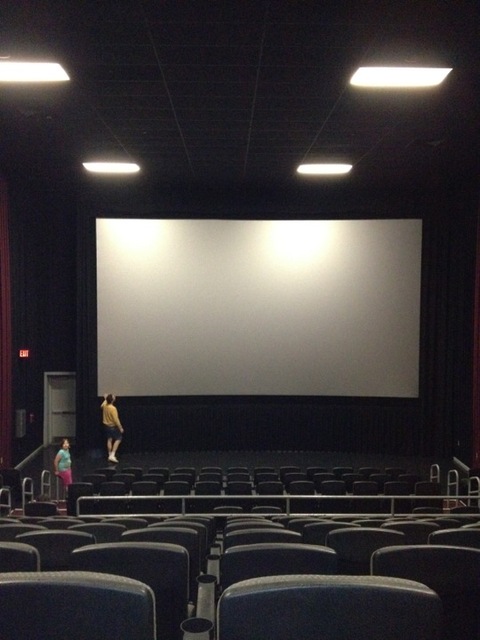 On September 29, 1998, Loews Cineplex Entertainment announced plans to enter the Greater Pittsburgh area with two new megaplexes. Just a few years later, one of these theatres, located in North Versailles, would be closed, having operated from November 23, 1999 to June 28, 2001. The other, the Loews Waterfront Theatre in West Homestead, would prove to be an enormous success.

Built on the site of a steel mill abandoned in 1986, Loews Waterfront, with its 22 screens and stadium-style seating, was the 108,000-square-foot anchor to Continental Real Estate’s 265 acre development of retail, residential, and office space. Opened on May 5, 2000, the theatre’s exterior was marked by a blend of squat, golden Moroccan columns and hand-cut tile, while the interior featured liberal use of red, yellow, and purple, all designed by architect David Rockwell. Topping the facility’s large concession island was, among other things, a ten foot-tall replica of a Coca-Cola cup.

The $22 million building’s gilded mezzanine level featured the Loews Club, a lounge and cafe that patrons could enter prior to or after their show for a $5 cover charge. Offering a full-service bar, this area also included a restaurant menu with items such as the Grilled Angus Steak Burger, a Caribbean Orange Rum Chicken dish, and a Chocolate Espresso Brownie Tower. Reservations for the Loews Club were accepted, over the phone or in person, up to three days in advance and included pre-selected theatre seat tickets which could be retrieved at the Loews Club box office. A private elevator would usher patrons to the Club’s coat check, intimate seating alcoves and sofas, and fireplaces. Access to the Club allowed customers to view movies from plush, oversized leather-like seats located at the top and center of the stadium sections within seven adjoining auditoriums. The bar and furnishings were a blend of polished woods, tufted upholstery, and painted-glass light fixtures. Back-lit photos of Oscar winners graced the space and Viewmasters on the tables featured images of the available dessert options.

Loews Waterfront was the last remaining theater operated by the company in the Pittsburgh area when it became part of the AMC Theatres circuit after the latter’s purchase of Loews Cineplex Entertainment. The others were the previously mentioned North Versailles location, Loew’s Penn, and Loew’s Ritz, which operated at 219 Fifth Avenue from 12/14/1923 through 4/30/1954.

Come January 23rd, an IMAX theater will open in auditorium #13 and “The Dark Knight” will be its first movie.

I went here with my husband and some of our friends to see “Coraline”. I hadn’t been here before ‘cos I see almost all my movies in my nieghborhood. The Squirrel Hill Theatre is within walking distance and the Manor is right around the corner from our house. The Waterfront is a pretty decent megaplex.

I’m shocked no one commented on the shooting death of a patron in the lobby while the theater was showing 50 Cent’s Get Rich or Die Trying. The film’s wikkepedia page: ( View link) ) discusses its controversies including incidents at a few theaters. Therefore this theater (which I’ve never been) has had some problems with patron behavior.

The theater must be in a rough part of town. Sounds like bad planning.

It’s in the Waterfront, which is a shopping center/“lifestyle center” built on the site of the old US Steel Homestead Works. Where once high paying industrial jobs existed, now low-paid sales clerks ring up sales of goods made in China at places like Target and Abercrombie & Fitch.

The Waterfront itself is okay, but the rest of Homestead remains devastated by the loss of the mills and it’s ancillary businesses like Mesta Machine. Check out my reviews of the Waterfront View link here. Be sure to click on the two Youtube clips for songs about Homestead.

And despite what I said above, and despite that I like this place’s archeitecture, I’m beginning to dislike this theatre.

That’s why I prefer the Manor, even if it’s a little dingy.

Oh I hope nobody inferred anything racial by my above comment. 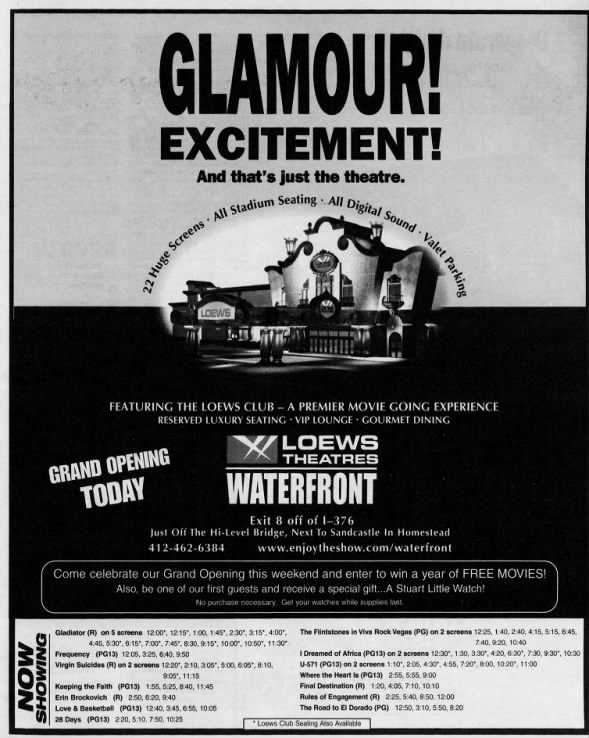