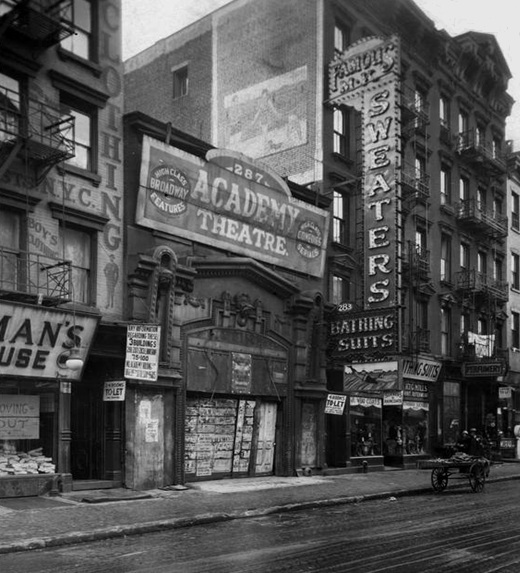 The Academy Theatre was opened by 1910. It was one of the first theatres to be operated by Marcus Loew. In November of 1921, a porter was instructed by the building’s manager to open a skylight to cool the auditorium. A boy mistook a ray of sunlight hitting the screen for a flame and shouted, “Fire”, causing a hundred people to rush for the exits. The Academy Theatre was closed by 1935.

In recent years the building (with a new facade) was used for office space. It was demolished in September 2016.

Academy Theatre then and now. 283 East Houston still stands, I don’t know if 287 was refaced or rebuilt
then (mirrored from NYPL)
View link

Sheesh… the placelooks boarded and condemned in the “then” photo! Take a look at the sign hanging between the theater and the building on the left. It appears to read “Any information regarding these three buildings … ” then lists the building #’s and lot size (“75x100”) followed by – presumably – a name and phone number to call with inquiries.

Judging by the information above provided by Lost Memory, I assume that two of these parcels were eventually sold and became the 1-story building and adjacent driveway we see in the “now” photo. At minimum, it appears the facade was reduced in height and redone in plain brick, assuming the original theater facade included a high parapet wall. But note that it looks like a tree is growing through the roof of the building in the “now” photo! There must be some kind of alley-way behind the wall on the right edge of the property line which tells me that at least this portion of the old theater was completely rebuilt.

I believe the building in the “now” photo is a functioning business and that the tree is part of a rooftop garden. (Just judging by what I’ve noticed during a daily commute which takes me westbound on E. Houston.)

Listed in the Film Daily Yearbook;1926 edition as having a seating capacity of 299.

The Academy Theatre is listed in the American Motion Picture Directory 1914-1915. There is a large ‘full frontal’ photograph of the Academy Theatre in Vol 13 No. 1 (First Quarter 1981) edition of Marquee, published by the Theatre Historical Society of America. It seems like the photograph was taken at the same time as the ‘then’ picture posted by rollingrock on Oct 4 2005. The caption on the THS photo states that the Academy Theatre was an early Marcus Loew operation and the photo comes from THS Loew’s Collection.

EdSolero: The notice over the center entrance on the THS photo reads;For information regarding these 3 buildings 283-287-291 E. Houston Street- Inquire in Sweater Shop (next door). There are the remains of torn posters over the front doors advertising the Pelestine Theatre and the Avenue A Theatre.

On my recent June 2006 visit to New York I took a look at the current building located at 287 East Houston Street and can confirm it is the Academy Theatre (now with a modified facade) and is in use as tax offices. Yes there is now a rooftop garden on top of the old theatre auditorium!
Here are a couple of photographs I took:
http://www.flickr.com/photos/kencta/188231745/
http://www.flickr.com/photos/kencta/188232247/

It turns out that, in addition to the tax preparer to which Ken refers, the building is actually home to a rooftop garden design, installation, & maintenance business, accounting for the previously mentioned rooftop garden!
(Sorry, discovered this a few months ago but neglected to post.)

I was wondering what is at least an approx. date for the photo at the top of the page. its obviously an old pic and the theater appears boarded up.