Walter Reade’s Westown Theatre opened on September 10, 1970 with Candice Bergen in “Soldier Blue”. The theatre was named after the Westown shopping center where it was located. It was the first movie theatre that the Walter Reade Organization, a motion picture firm out of New York, had opened in an African-American community. Walter Reade Jr., president and chairman of the Reade Organization said “If this theatre prospers as we expect, we will invest in similar ventures”

The gamble that they took did not pay off. “Our losses were drastic”, said a spokesman for the Reade Organization. “Some nights we played to three or four people”. They closed the Westown Theatre on February 28, 1971.

After being closed for eight months, the Westown Theater opened again under new ownership and this time it showed family type movies only. It wasn’t long before the theatre was closed once again.

The Westown Theatre sat empty for over a year before re-opening on July 6, 1973 as the Roxy Theatre showing first run black-oriented films opening with Don Gordon & Richard Pryor in “The Mack”. That idea lasted until April 3, 1975 when the Roxy Theatre closed again for the last time.

There are two things I know about this theater:
(1) It was a round structure, very unique in theaters, and
(2) It was razed for something else, I believe a bank branch office building.
I personally know the man who bought all the laminated timber beams from the building. They were later lost in a fire.

Boxoffice of August 31, 1970, says that the Westown was housed in a geodesic dome. The theater was designed by a Calfiornia architect named David Jacobson Jr., according to the Boxoffice item. I’m not sure if it’s the same David Jacobson who designed many buidlings in Las Vegas and Atlantic City, including a number of major projects for Donald Trump, but odds are it was. Article about its closing in 1971 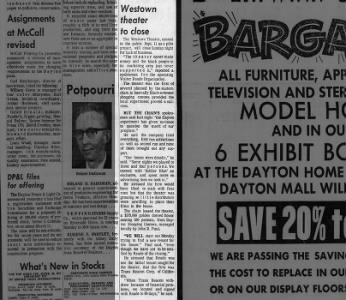 Reopened as Roxy on July 6th, 1973. Grand opening ad in the photo section.