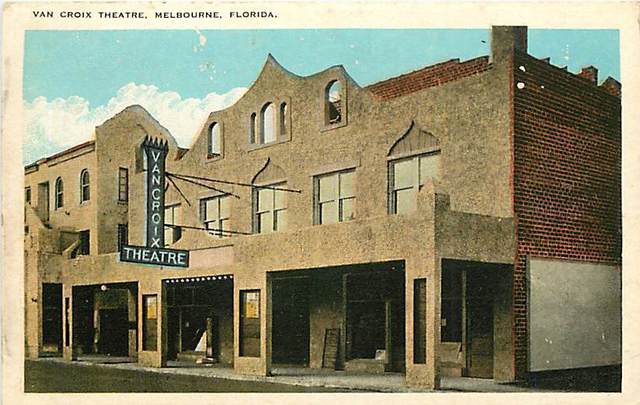 Originally opened in 1925. By 1953 it was operated by the Talgar Theatre Company chain. This was the only theater in Melbourne until the early-1960’s. I remember seeing Disney’s “Snow White and the Seven Dwarfs” here as a child. It was owned by the Van Croix family. By 1968 it was operated by Kent Theatres Inc. It had closed by 1970.

It was demolished in December 1974.

In 1963 the Van Croix was part of Kent Theaters, headquartered in Vero Beach. President was Fred Kent.

The December 16, 1974, issue of Boxoffice Magazine said that the Van Croix Theatre was being demolished to make way for a parking lot to serve Flagship Bank of Melbourne. It also said that the theater had been opened in 1925.

The Van Croix Theater was on US 1 in old downtown on US 1 in Melbourne, Fl. 32902. It originally opened in 1925; this was the only theater in Melbourne until the early 1960’s (1 screen, 747 seats). I remember seeing Disney’s “Snow White” “Puss-n-Boot, “Flipper” and many more here as a child. I saw my first R rated movie with my dad “C.C. and Company” with Joe Namath and Ann Margret. It was owned by the Van Croix family. Loved the balcony and the old style marquee street side and the simplicity of the snack bar and whole theater! It was demolished in December 1974.

Hello! I am doing some research on my late father who lived in the Melbourne area after the Korean War. He was stationed at Patrick AFB and lived in the area in the mid to late 1950’s. He once told me a story of how he painted a scene from Davy Crockett which was auctioned off at a local theater during the premiere of Davy Crockett, King of the Wild Frontier. I’m assuming it was for the Van Croix theater since it was the only one int he area in the mid 50’s. I know this is a long shot but was hoping someone would remember this premier and remember the painting my dad did. Thanks!

This was the organ my grandad had in his Bradenton, Fl house. He was a master organ craftsman and tuner who worked for Mighty Wurlitzer. I remember visiting him when I was a child and sitting next to him on the bench. He had a full set of pipes in his attic and the basement with all different special effects like a set of drums and cuckoo clock. It was an amazing thing to experience!!!

The Theatre was left to Hugh and Mary Kempen, by Mrs. Van Croix who were my great aunt and Uncle. Just a FYI

I found reference of a Gem Theatre that was opened on New Haven Avenue in 1914 by J.B. Johnston, and was sold in 1916 to former first Melbourne Mayor Charles John Frazier Campbell. It was still in existence in 1924, the date of a photo I saved from the Melbourne & Melhi Memories-Melbourne Florida Facebook page. I’m looking for confirmation that it ever showed films, before I add a page for it to CT. Please respond back here if anyone finds anything further.

I grew up in Melbourne in the 50’s thru the late 90’s. I went to the Van Croix Theatre all the time. They had a twist contest which was a big turn out. I wore red and white capri pants and a white peasant like top. I won that contest and got a check for $50 which was quite a lot then.