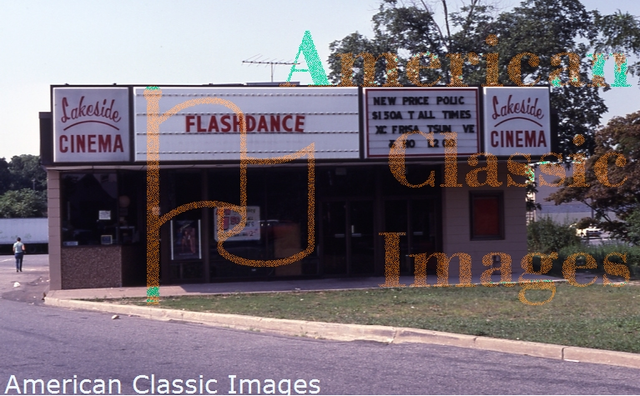 This single screen Jerry Lewis Cinema opened on October 4, 1972 as a first run house. The opening movie was Marlon Brando in “The Godfather”. On September 12, 1975 it was renamed Lakeside Cinema. In 1976 it was screening adult movies. A few years later in went to a dollar policy. It was closed on October 30, 1986 with Matthew Labyorteaux in “Deadly Friend”. Currently it is being used as an OTB.

Thank you both for your time.
You learn something new every day.

In order to be consistent with logic used in other postings this should be changed to the Lakeside Cinema (aka JL)since that was the name it bore when it closed. The address of the theatre (now OTB per an earlier posting is) 136 Portion Road. Interestingly, since this is a racing theatre site the front portion of the theatre actually has a screen and seats.

The entrance to the OTB has been moved to the east side of the building but from Portion Road it is readily seen to have been a theatre.

You’ve got to be kidding Lost Memory. Lake Ronkonkoma and the village name for it go back to antiquity – Indian name you know. Glad you posted the picture. Despite the instructions you gave me previously I haven’t been successful. I actually looked at every theatre in New York at the image site and found this confirming my theory that the Lakeside was the former JL. There are a great number of other theatres whose images appear on this site which you frequently access. That’s why I devoted and hour plus listing them. Now all I have to do is move them over if they’re not already there. I was happy to see they had an image of the Floral with its new signage after they had to remove the old one because of the widening of Jericho Tpk. Unfortunately, it’s after the theatre closed and it is in disrepair. I also sent a letter to the webmaster at images about one image incorrectly labelled, the Playhouse, in what they show as Merrick but is actually Bellmore. When I last checked they had not made a correction. This could be a full time job just to get the LI theatres up to snuff. And there are at least a half dozen I’m working on. Love to chat and try to pool our efforts/interes/talents.

Never even noticed. Just happy to see the image.

What a crime, Rich Jerry Lewis stealing Mom and Pop’s money! They totally got away with it too. They where the worst theaters of their time.