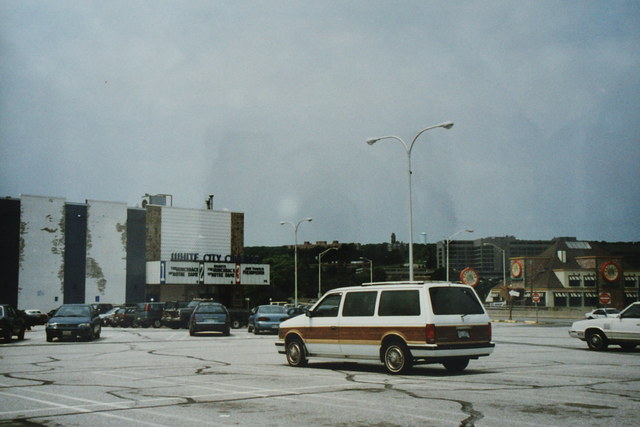 White City Cinemas in Shrewsbury was mentioned in a post by a longtime projectionist about a theater in Worcester, so I looked it up. The number is disconnected and was in the White City Plaza East. On this website about the resort and amusement park, Lake Quinsigamond, http://www.geocities.com/Athens/2088/quinsig.htm, there was a mall and movie theater complex located at the plaza on those grounds.

I worked at the White City Theatre (later named White City Cinemas) from 1967 through 1978. As was stated, the late 60’s saw lengthy runs of Mary Poppins and The Sound of Music. Doctor Dolittle, Hawaii, Funny Girl, Hello Dolly, and others enjoyed long engagements as well. Reserved tickets were sold and we learned how to “dress the theatre” making sure we distributed tickets evenly around the large orchestra and 325 seat loge. The number 1097 sticks vividly in my mind, but I can’t remember if that was the total seating of the complex or just the orchestra!

The theatre was run by Stanley-Warner and later by RKO Stanley Warner. I remember the home office being in Wilkes Barre, PA.

Sometime in 1976 or 1977, Showcase Cinemas took over the operation. I recall the theatre being closed and then reopening as White City Cinemas. In June 1977, we opened with Star Wars in Cinema 1 and I believe New York, New York in Cinema 2. The sell out crowds for Star Wars made the summer of 1977 fly by. I cannot believe that was thirty years ago.

I am sorry the the cinemas were demolished. Many happy memories remain, however!

Listed as White City Shopping Center Theater in the 1970 IMPA. It was part of the RKO-Stanley Warner chain at that time.

In response to Michael Coate’s statement that “2001: A Space Odyssey” never played at White City Cinema in Shrewsbury, Ma. I need to reply that no matter what the newpaper advertisement states, the fact is that the movie never played at Showcase Cinemas on Southbridge St. in Worcester. Perhaps there may have been a bidding war happening at the time of publication and White City Cinema won out over Showcase. I’m sticking to my guns on this one because I was there.

**In response to Michael Coate's statement that "2001: A Space Odyssey" never played at White City Cinema in Shrewsbury, Ma. I need to reply that no matter what the newpaper advertisement states, the fact is that the movie never played at Showcase Cinemas on Southbridge St. in Worcester. Perhaps there may have been a bidding war happening at the time of publication and White City Cinema won out over Showcase. I'm sticking to my guns on this one because I was there.**

There are plenty of verifiable sources to support my claim that in its original first-run, reserved-seat Worcester engagement “2001: A Space Odyssey” ran at SHOWCASE CINEMAS and not at WHITE CITY. Here’s one reference. Here’s another.

Also consider that “2001” was initially released exclusively to Cinerama theaters (as this article details), of which SHOWCASE CINEMAS was the only such venue in Worcester.

Dude, just deal with it, you’re simply misremembering what occured. What you probably are remembering is a re-release or return engagement that took place years later. It’s human nature and not uncommon to misremember details, especially those from several decades past.

There’s an interesting – and entertaining – article about one family’s experience seeing “The Graduate” (1968) here on this website: http://www.dickwhitney.net/dickwhitneyautobiographyTheGraduate.html

I was the manager at White City from ‘75 to '77 and worked with Charles Gobron and Kathy Blake as my assistants. The theater was really beautiful, but like many of the huge houses was pretty hard to fill. We did screen a week of “1776” for school groups, and that was about as full as it got. I remember the ushers changing the huge marquee in the winter with wind just blasting off Lake Q – it was brutal. We screened “Nickelodeon” for Christmas in 1976 and as a promotion the studio only charged a nickel on opening night. It was predictably frigid, though, and the theater was only half full. A few days later I arrived to open and found a bunch of suits from Redstone inside. They had bought the theater and no one from RKO had even told me. I worked for them a week and transferred to the RKO Merritt in Bridgeport, CT. I miss the wonderful kids that staffed the place – they were a lot of fun.

As family-authorized caretaker of my late father-in-law’s slide collection, I’ve uploaded a 1967 photo of the White Cinema Theatre in the out-of-focus background of a crew race on Lake Quinsigamond. I do this as a thank-you to the CinemaTreasures.org website for helping me identify the photo. The guidelines for this website in 2014 say I should upload only if I’m the photographer, but I am following the spirit of that restriction. The unseen, in-focus foreground is an excellent photo. If you people celebrated privileged teenage white males good at propelling tiny boats, I would have uploaded the whole picture. Upon reading that last sentence, never mind. The fuzzy background theater is a more enduring memory than the in-focus foreground.

If you go to the online recollection link posted by Logan5, you will note the White City spelled Katharine Ross' name correctly on the marquee, but misspelled it on the makeshift one-sheet display lettering next to the entrance as “Katherine Ross.” Perhaps the assistant manager was in a tizzy over the studio finding out.

Stanley Warner Theatres used this basic Theatre design in many houses that it built in the late 50’s and early 60’s. The Washington DC area contained many of the identical designs like the KB Fairfax circle, the KB Cinema 7, and KB Langley. The Cinemart in Hampden Ct. may have also been the same design.

The equipment installed in White City came from the old Warner Theatre in downtown Worcester that White City replaced.