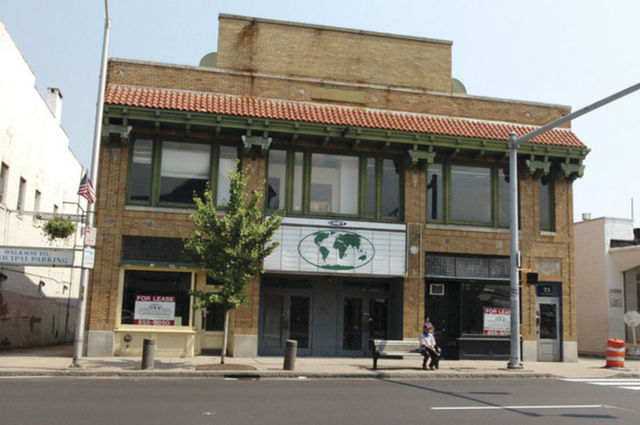 The Regent Theatre was opened in 1915. By 1941 it had been renamed Norwalk Theater and was operated by Paramount Pictures Inc. through their subsidiary Mullins & Pinanski. It was closed in 1950. It was reopened on December 26, 1953.

I used to go see Max Creek and Widespread Panic at the Globe Theater in Norwalk. The first time I went there was in 1994. The last Creek show I saw was in October of 1998 and this was a great regional venue. The sound was weird as it circulated around. When you went into the balcony, you always felt like you would fall down because of the steep angle. (The floor below had no seats - it was all general admission). There was the regular balcony and then another small one above it where we all went to smoke up and nobody cared. The floor was small but the theater looked big from the parking lot.

Loews Theatres was the last movie operator, after acquiring it from USA Cinemas, who acquired it from CinemaNational. It closed in 1990.

It eventually reopened as a nightclub known as the Roxy Theatre and later, the Globe Theater and has since closed again.

A restoration for live theatre and other entertainment began in 2015, and the theater is slated reopened as the Wall Street Theatre in late 2017 as a performing arts venue.

Opened in 1916 as the Regent at 73 Wall Street, per the City Directory. Becomes the Norwalk Theatre in 1939 at 71 Wall. In 1986 it’s listed as the Cinemanational Theatre Operations as well. Last listed in 1989.

I was the manager for CinemaNational from around 1985 to 1987. This was an old vaudeville theatre with a stage and proscenium arch. Carbon arc projector when I was there. Wasn’t showing the better films like when I managed the Greenwich Twin in Greenwich, CT, more like “Halloween III,” Friday the 13th part 6, “Purple Rain”, “Batchelor Party”, etc.

Kenneth — I would love to get in touch with you regarding some questions I have about the theater — is there a way to do so?

The Regent Theatre opened in 1915. This item is from the December, 1915, issue of the trade union journal The Motorman and Conductor:

“Norwalk, Conn.—In November the members of Div. No. 476 were each presented with two attendance tickets to the picture play entitled "The Birth of a Nation.” The compliment was extended by the management of the Regent Theater of Norwalk.

“Our benefit drawing with a Hamilton watch as the prize resulted in drawing of the watch by Judge J. T. Hubbell of Norwalk. The Judge very kindly returned the watch to us under provision that it should be chanced off among our members. The result is that Motorman J. H. Wilmott Is now running the Short Line by it.

“On Dec. 13 we held a musical comedy benefit at the Regent Theater. It was a success.”The theater is now being renovated by a non-profit organization, and is to eventually reopen as the Wall Street Theatre. This is their web site. Their history page says the Regent opened in September, 1915. There is an undated photo of its reopening as the Norwalk Theatre. The first movie shown under the new name was the 1939 production The Story of Alexander Graham Bell. The Norwalk Theatre closed in October, 1989, with the movie Kickboxer.

Remove the spaces from below:

B o b k (at) wallstreettheater (Dotcom)

The Norwalk Theatre closed in 1950. After three years of dormancy, Norman Black, Leonard E. Sampson, and Robert C. Spodick relaunched the theatre on December 26, 1953 with “Easy to Love” with Esther Williams.

Bob K, , rfkjunior, I tried to email again, but the email you left me bounced back like it did in August 2015.

Former Wall Street Theatre manager from the mid 80s. Please share a way I can contact you. If you still have questions for me. I’ll be happy to help you.