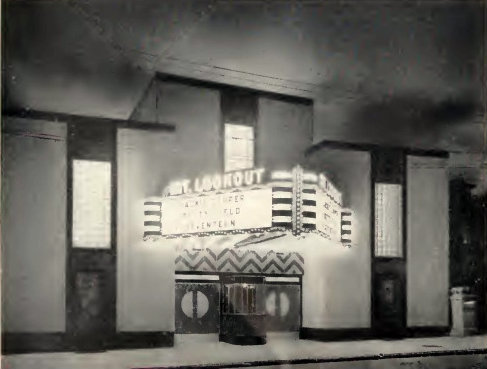 The Mount Lookout Theatre was opened on May 9, 1940 with Spencer Tracy in “Northwest Passage”. It had a seating capacity for 750. It was operated for many years by Cline family.

This is the website for the current occupant:
http://www.theredmoor.com/

A photo of the Mt. Lookout Theatre appears at lower right of this page in Boxoffice, February 21, 1941. The caption attributes the design of the theater to Cincinnati architects S.S. and George Godley. If correct, this is interesting information, especially in light of hank.sykes' revelation of the involvement of the F&Y company in the project.

The photo in Boxoffice shows a moderne building similar to other theaters built by F&Y during this period. I’ve never been able to find the name of an architect associated with F&Y, though it was certainly a design/build company. The Y in the company name is for Leo Yassenoff, and I’ve always heard that the F was supposed to be the initial of the architect, but now I’m wondering if the Godleys might have regularly done designs for F&Y?

Samuel Godley died in 1941 (on November 2, his 83rd birthday) and was known primarily for his residential designs, but did do a number of larger projects. His biography in the Biographical Dictionary of Cincinnati Architects doesn’t mention any theaters. His son George Godley doesn’t have an entry in the Dictionary.

I noticed a photo of the BELLE MEADE THEATRE in Nashville, Tennessee in that 1941 Boxoffice.

Mt.LOOKOUT August 9.1974 NOW SHOWING Jon Voight in “CONRACK” rated PG played at 7:00 and 9:00 pm. it was listed under the NEIGHBORHOOD THEATRES LOGO.

Joe Vogel thanks for the great looks at Box Office Mt.Lookout Th.I’m sure you are familiar with Theater Catalogue as well.

Link with 28 photos of the Redmoor Event Center.