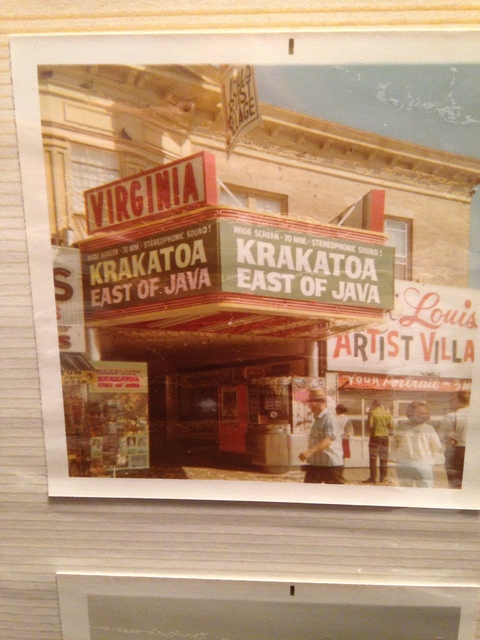 Located on the Boardwalk and Virginia Avenue. The Virginia Theatre was opened in 1916. It was operated by Warner Bros. Circuit Management Corp. in 1941. It was later Atlantic City’s premiere theatre that showed roadshow features. The theatre had 70mm and stereophonic sound equipment. The theatre closed at the end of 1973 when the Government purchased the block for future casino development. The theatre sat empty until it was demolished around 1980. The last features that played there were “The Sound Of Music” re-release in 70mm which opened June 27, 1973, followed by “Cabaret” re-release and the last feature to play was “A Touch Of Class” with Glenda Jackson and George Segal in 1973. They were scheduled to get the re-release of “Mary Poppins” on August 15, 1973, but didn’t, due to the great success of “A Touch Of Class”.

A few of the other features that I remember playing there were, “It’s A Mad Mad Mad Mad World”, “The Carpetbaggers”, “Gone With The Wind”, “Sweet Charity”, “Krakatoa East of Java”, “Hello Dolly” (non-roadshow engagement that opened June 24, 1970), and “Fiddler On The Roof”, which was done as a reserved performance format instead of roadshow engagement.

Thank you David Zornig for these great 60s photos of the boardwalk. I didn’t get there until the latter part of the 60s but it still looked pretty much the same. It’s like I like to remember it. Visited one more time in ‘76 and the blight had taken over.

But I’m dismayed to say the least that people claim its premiere 70mm roadshow house the Virgina was during all those years a run down dump. So it’s been said.

Vindanpar, for the main Roadshow theater in the Hamid chain It had no curtains or masking. The Roxy was double the size of the Virginia had curtains and masking and a stage. One of the screens from the Virginia was moved to the Music Hall at the Steel Pier. When the screen was lifted up you could see on the bottom where it said Virginia Theater. I was only in this theater several times for Hello Dolly. Honestly I was not impressed. David Zornig than you too for the photos. I had no clue that South Pacific played there. The only early films I remember there before 67 were the SOM and It’s A Mad Mad Mad Mad World. There was a post card in the 60’s that showed the Virginia had The Carpetbaggers but no clue what year that was. It was an exception for a boardwalk theater to be open during the winter. Hamid only kept the Hollywood and Center open during the winters. The Shore stayed open all year in 1969 after Oliver closed.

Mikeoakland park it seems you went a few times to see Dolly at the Virginia. You should have traveled up to the Asbury Park St James to see it there. A very classy elegant large screen, borders, curtain 70mm roadshow house. As I’ve said I was only there once but had I been older I would have gone probably several times to every roadshow picture there. If I were a billionaire I would rebuild it as a revival house.

I had a friend who was a big fan of Sabatini. He much preferred the Ramon Navarro Scaramouche to the Granger(I love it but I’ve never seen the silent.) He went to look it up at the Lincoln Center library and came back to show me a copy he made of an ad for it. It was for the St James. I thought that was pretty cool. Who needed Granada when they could have had Asbury Park?

Cinema Tour website lists the address as 935 Boardwalk and that it operated from 1916-1973.

Vindanpar I am sorry I just saw your comment from January 2020. I saw Dolly originally in Philly at the Randolph when it was a roadshow engagement. The Randolph was a Cinerama theater so it had an amazing curved screen and gold curtains. The next film to play after Dolly was the than x rated I A Woman. They than got Tora Tora Tora another roadshow engagement and 6 months later it was demolished for a parking lot. So sad

Mikeoaklandpark so I imagine you got to know the theaters of Atlantic City and Philadelphia quite well perhaps with a side trip to Manhattan? Lucky you. It must have been painful watching the Randolph come down.

Vindanpar It was painful to see all the theaters in Philly AC and NYC demolished. AC slowly died once the casino’s came in. The Virginia closed at the end of 73 and didn’t reopen because the government bought the block. I never understood that because everything else stayed open for years on that block. The only thing I can think was Hamid’s lease ran out, but he also closed the Roxy too. The Apollo closed in mid August when their lease ran out with the roadshow engagement of Last Tango In Paris. It was moved to the Margate but not roadshow.

So how many roadshow theaters did Atlantic City have? Virginia, Embassy, Shore, Center,…any others? That’s quite a few. I’m surprised the Virginia did not get Oliver! or Funny Girl the two big roadshows of summer ‘69.