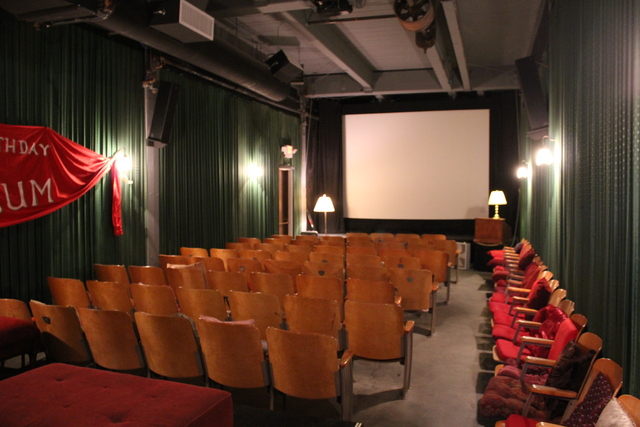 Tucked away in an alley behind City Hall, in a historic building on the waterfront downtown. The bentwood fold-down seats are from the original territorial legislature - so throw-cushions aide in comfort. The building used to be an industrial laundry, with large gears still present in the ceiling of the auditorium. There is a black & white photo of the space when it was a laundry in the 1920’s, on the wall of the lobby.

The theatre opened in this location in the 1990’s, so that Lisle Hebert could play his own, professionally and locally produced film “GoldTown”, and it is an excellent documentary about the history of Juneau. Lisle was raised here and worked in the very same laundry when he was a kid. He named the theatre Gold Town Nickleodeon after his documentary, and to harken the mining heydays of Juneau in the early-1900’s. His movie reached Finalist levels at the Flagstaff International Film Festival in 1999.

Lisle’s passion for film keeps his theatre open with current independent, foreign films and documentaries. It is the only ‘art-house’ in town. The Summer tour industy didn’t support regular showings of “GoldTown” through the new Century, so it now no longer plays, apart from special request. The local high school Alaska History class come to view it every year. In the Summer of 2009, Lisle decided to begin his own film-making endeavours again, and has turned over the management and running of the theatre to a friend, but he still selects the movies that play here.

Here’s a recent article about the theater; it has new management and adding to its programming: View link

Entertaining, and I felt like I had visited the Gold Town even though I’m in Miami.

Some of the other “Art House Tales” videos may be of interest to you as well.