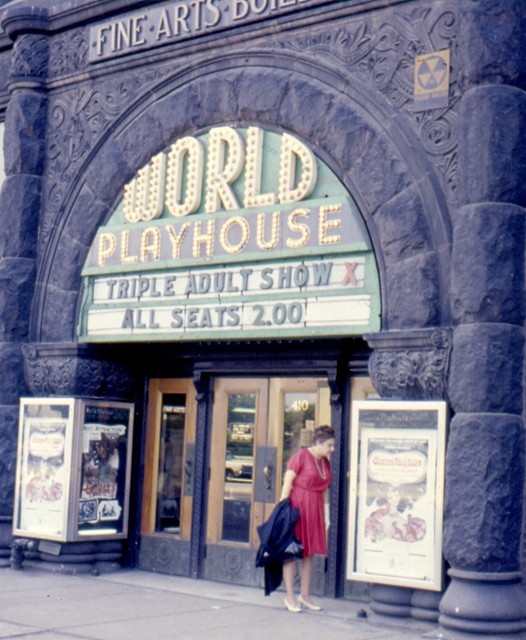 The Solon S. Berman designed building was built 1885-1887 as the Studebaker Building. A massive building with gigantic granite columns, it was built for the Studebaker Co., which at the time manufactured carriages. The first four floor originally served as showrooms, with manufacturing on the upper four floors and in the basement. At the time of its construction, this part of Michigan Avenue was largely residential, but the character began to change soon after, with the construction of the Auditorium Building to the south in 1889. To the north was the Art Institute of Chicago, built in 1886-1887. Both neighboring buildings echoed the Studebaker’s architecture with extensive use of arcades and rusticated stone.

In 1890 and 1892 the Art Institute built and enlarged an annex addition to the Studebaker to house its galleries and libraries while it prepared to move across the street into the Memorial Art Palace, used by the World’s Congress Auxiliary for scholarly programs during the Columbian Exposition. In 1895, the Studebaker Company began work on a new building on South Wabash Street and once it was complete in late-1897, the old building was re-dedicated to Fine Arts.

Under the management of Charles C. Curtis, the new plans included two music halls on the first floor, Studebaker Hall, seating around 1,500 and University Hall, seating around 700 for recitals. The top story was removed and three new stories added. The upper part of the building would be offices and studies for musicians, artists, publishers, architects and other artistic purposes. A smaller assembly hall would be built on the 10th floor, connecting to the Auditorium Hotel’s dining room. The open-air Venetian Court was built in the fourth floor light well. Stores on the lower floors would be designated for musical instrument stores. The new building would become the hub of the arts community in Chicago, and over the years held studios for such luminaries as Frank Lloyd Wright, Lorado Taft, John T. McCutcheon, L. Frank Baum, and organizations such as the Daughters of American Revolution, Chicago Women’s Club, University of Chicago Teachers College, Chicago Musical College, Poetry Magazine, the Little Room, the Little Theater, the Kalo Shop and the Illinois Women’s Suffrage movement.

Studebaker Hall opened September 29, 1898 and was primarily used for popular music, meetings and plays. It was noted as exceptionally beautiful and acoustically superior. Originally it had an arched proscenium like the neighboring Auditorium and 34 box seats across three levels, divided by stately columns. Early on it was used for light opera by the Castle Square company of Boston. It was leased to Connor & Dillingham of New York in June 1907 and was refurbished. In August 1913 it turned over to Klaw & Erlanger. The Studebaker began its brief high-class film career April 20, 1914 when Jones, Linick and Shaefer assumed operations, with an even briefer stint under Triangle. In September 1917 the Shubert Organization took over the lease, working with Klaw & Erlinger, and began a major reconstruction. The proscenium arch was enlarged, the side-walls rebuilt and a new main floor, balcony and gallery were constructed, although the ceiling remained the same. Hanks & Gazzolo took over in 1922, and in October 1927, Samuel Insull took over the lease so that his theatrically orientated wife could manage it (Gladys Insull was the inspiration for the Susan Alexander character in “Citizen Kane”). After the stock crash devastated Insull, the Sudebaker ran diminished until being leased to a variety of itinerants. Among them was the Central Church, which held services there 1944-1950. On February 11, 1950 it closed and was used as studios for NBC through 1955, reopening October 2, 1956. from then it operated under a series of organizations including the Nederlanders. It was only used sporadically in its later years, and the final show may have been “A Prairie Home Companion” in October 1982.

University Hall opened December 29, 1899 and was renamed Music Hall around 1903 when a balcony was added. It was again remodelled somewhat in 1908, and renamed Fine Arts Theater, now presenting plays. In 1912, it was totally rebuilt and the Fine Arts Theater name became more prominently used. On May 16, 1914 it started showing films under the Alfred Hamburger Organization during gaps between live shows. Another round of renovations came in October 1916, when it was renamed the most familiar name, the Playhouse Theater, and went back to showing plays except for brief stints of movies. In 1919 it was leased to Metro Pictures, but showed both film and performance through the 1920’s. In April 1933, coinciding with the Century of Progress, it was again renamed World Playhouse, featuring movies, especially foreign films. The World Playhouse became essentially Chicago’s first dedicated foreign and art film theater. It closed in 1972, in its final year booking adult films among other imports. It was renovated and reopened in September 1980 for chamber music.

In December 1982, M&R Amusement Company announced plans to convert the two theatres into a cinema complex, becoming the first theatres in the Loop to open in 10 years. They opened on December 25, 1982 with “Moonlighting” in Theatre 1 (Studebaker) and “Veronica Voss” in Theatre 2 (World Playhouse"). Initially the World Playhouse continued showing live entertainment occasionally. In 1983, the Studebaker stage was walled off to create Theatre 3, utilizing a dressing room to create a projection booth. In 1984, the same approach was taken in Theatre 2 to create Theatre 4. Theatre 3 was renovated so that both could share a newly built booth in between. Theatre 1 held approximately 1,200 seats, Theatre 2 approximately 550 seats, Theatre 3 had 240 seats and Theatre 4 had 158 seats. Showing mostly art and independent films, with occasional Hollywood fare, the theatres closed in November 2000.

Since then various proposals were floated to reopen the theatres but none came to fruition. Theatres 3 & 4 were eventually removed and the Studebaker and World Playhouse were occasionally opened for events. In 2014 work began to restore both theatres, and they reopened October 18, 2015. In August 2021 it was announced that a major renovation/restoration would take place, beginning later in 2021. The Studebaker Theater reopened as a live theatre in May 2022 with “Skates: A New Musical”.

From The Chicago Tribune Koopman returns, and the Studebaker is back in the concert business March 10, 2016

(Discussion of the return of harpsichordist Ton Koopman to Chicago..then the following)

“That said, the event was most notable for being the first major concert to take place in decades at the Studebaker Theater, a historic gem of 1898 vintage that once was a flourishing recital hall (Hermann Prey and Regine Crespin sang here) but has been shuttered for two decades.

The mid-sized venue, modeled after a typical small European opera house, has recently undergone a major renovation by the building’s management and is nearly ready to serve as an additional venue for classical music on the cultural mile of South Michigan Avenue. Such a venue has long been needed, and it’s heartening to know that Chicago classical presenters soon will be setting up shop in this inviting space. From Tony to Chick to Ramsey, a jazzy summer at Ravinia

Audience members were expected to ignore the bare stage house and the lack, as yet, of a functioning air-conditioning system. (Free water bottles were provided.) There was an awkward delay for the stage lighting to be adjusted to enable Mathot to properly see the printed music in front of her. A more serious problem, from the listeners' perspective, was the skimpy program leaflet, devoid as it was of information about the music or the harpsichords on which the Koopmans were performing.

On the positive side, the Studebaker’s clear acoustics, intimate sightlines and comfortable seats made it an appropriately intimate place in which to perform and hear 17th and 18th century keyboard works. It was good to have Koopman back in Chicago, where he last conducted the Chicago Symphony Orchestra in 2012. His local appearances go back at least as far as 1992 when he brought his famed Amsterdam Baroque Orchestra to town."

From the “About” section of the new Studebaker Theater website:

The Studebaker Theater is housed in the historic Fine Arts Building

In 1898, The Fine Arts Building created the historic The Studebaker Theater. Originally built to house vaudevillian performances, but later expanded into large productions in the 1920’s. During the subsequent years, performances by Bob Hope, Peter O’Toole, and Vincent Price graced the stage with their immense theatrical skills. The Studebaker Theater continued on throughout the years for being known as one of the most important live theatrical venues in the City of Chicago.

Today, The Studebaker Theater, which holds 740 seats, reopened for live performances in 2016.

Newspapers from the mid 80’s have the address as 418 S. Michigan Avenue. Phone number at the time as 939-3700. (see ad in “Photo section”) Newspapers have been known to make mistakes.

I looked and saw this never got posted on 2018. Elevator operator in the Fine Arts Building.

Didn’t realize their was a Shorpy link for this 1903 photo I posted previously. Click View Full Size for incredible detail.

Do you have a story about the Fine Arts Building? We want to hear it.

We are collecting memories and personal histories from the visitors, artists, staff and Fine Arts Building aficionados that have made this space shine for more than 100 years. Follow the link to share your memories of the Fine Arts Building, the Studebaker Theater and the last 100 years of this magnificent artistic haven.

Status is now Open. “Skates A New Musical" is running through August 28, 2022. Link about the newly renovated Studebaker Theater below. Same article as the Sun-Times minus the paywall.