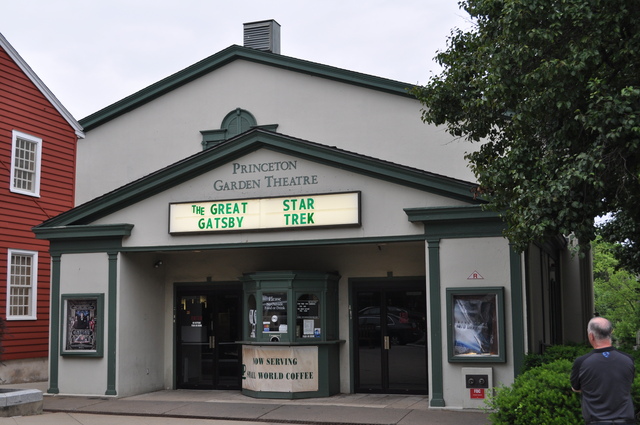 Located across from Princeton University, the theatre has been modernized yet maintains an old time charm.

The Garden Theatre opened its doors on September 20, 1920, with a showing of “Civilian Clothes”, starring Thomas Meighan. The event also featured a live orchestra and palms and ferns arranged on the stage.

Sameric Corporation ran the theatre from 1975 through 1988, turning the facility into a twin theatre in 1981 known as the Eric Garden Theatre. United Artists then operated the facility for four years before Theater Management Corporation, which operates neighborhood theatres throughout the northeast, began leasing and managing it in 1993, after it was quietly purchased by Princeton University.

The theatre closed temporarily in August 2000 and reopened in June 2001 after a $1M renovation. In 2014, it was taken over by Renew Theatres, the non-profit organization which operates in the Philadelphia suburbs the County Theatre, Doylestown, the Ambler Theatre and the Hiway Theatre in Jenkintown.

Interior photo after the renovation at this link:
View link

Listed in the 1961 FDY as part of Associated Prudential Theatres, Inc.

The interior photo TC posted of the renovated Garden made me say, “Now that’s more like it.” I’d been to the Garden before it was twinned—both to see movies and to stage a cover photo for the college yearbook (the management graciously gave us the use of the theatre’s marquee and lettering)—and the initial (1981) twinning job was a crime: squalid little shoeboxes with plaster-board dividing wall and tiny screens. I’ll have to make time to take in a movie at this theatre the next time I’m in the area.

our new website www.thegardentheatre.com E-mail us to join our monthly newsletter and you will be the first to know about upcoming films at the garden theatre.

The information on this theater is slightly inaccurate. I moved to Princeton in September 1980 and it already had two screens. Also, the theater closed down for a few years in the late eighties and early nineties shortly after the UA Movies at Marketfair opened in 1987.

Saw many movies here but the most memorable are The Deep around 1977 and then Poltergeist. Place was packed for both and the experience for Poltergeist was off the hook. The whole crowd was just blown away. Great memory.

Theater will close for renovations in June, then reopen under new management. Renew Theaters, a nonprofit that runs three single screens in Pennsylvania, will be the new operator. NJ.com story here.

With the new management company I would predict a return to more art house movies since the Ambler, HiWay & County offer this genre.

https://www.google.com/url?sa=t&rct=j&q=&esrc=s&source=newssearch&cd=1&cad=rja&uact=8&ved=0ahUKEwiP3bzkkLvSAhVKLyYKHbCZCjEQqQIIGigAMAA&url=http%3A%2F%2Fwww.nj.com%2Fentertainment%2Findex.ssf%2F2017%2F03%2Fcentral_jersey_film_hall_named_njs_best_movie_thea.html&usg=AFQjCNELEq5VhlBPedDGQedzTcIROPG-Mw&sig2=wHX9lia-x07e_jr1SKsj4g&bvm=bv.148747831,d.eWE Congrats to the winner!!!