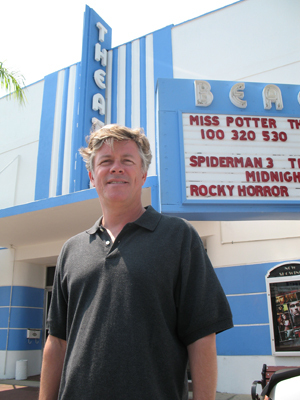 The Beach Theatre opened on January 15, 1940 with 528 seats. Remodeled in the mid-2000’s, this Art Deco movie theatre is close to the pristine beaches of western Florida. It recent years it showed a mix of movies, plus some live performances. The Beach Theatre was closed in November 2012. In August 2021 it was purchased by new owners. In November 2021 renovations and restorations began, with a proposed reopening as a movie theatre and live venue in summer of 2022 with a reduced seating capacity of 160.

Would love to reopen this classic theatre.

Message for MovieMad52: Hey, I noticed that you have a desire to reopen the Beach Theater (from your comments spanning 2 years). If you would like to discuss a possible business venture that would satisfy your dream, please contact me at . I have some ideas about a “new” st. pete bch theater. I’ll tell you more if you reply!! -J R

I am interested…what do you have in mind?

The BEACH THEATRE was not a metal “Quanset” hut construction. I was the projectionist there when it was operated by Bill Eisenhart. This was during the time we ran every Marx Bros. film available. We also ran Laurel and Hardy films and played to a sold out house every Friday and Saturday. The booth had Super Simplex projection heads with RCA sound heads. It had Strong Mogul arc lamps and Kneisley tungar bulb rectifiers. It was a lovely theatre and could be re-opened again. ps: The concession stand had a MANLEY popcorn machine that looked like a juke box.

Paramount subsidiary Florida State Theatres controlled the Beach Theatre under a lease from 1941 until 1950, according to an item in the March 4, 1950 issue of Boxoffice. The Item said that FST had just cancelled the 10-year lease and that operation of the house would be taken over by the building’s owner, Stephen S. Girard.

This article about the Beach Theatre says that the house was only active intermittently during the 1940s, so it seems likely that FST leased the place primarily in order to prevent a competitor from getting control of it.

For Sale as of July 29,2021. Listing below with 15 photos including interior.

Has been purchased and the new owners are contemplating future use. https://www.tampabay.com/news/business/2021/09/04/whats-next-for-the-beach-theatre-new-owner-wants-your-input/?fbclid=IwAR3G0yD_U3iqsnfFAAt0pk15GkMUVF3xbwLNa9ZHP1fWIk1yWuQGA7Zjp-M