Center for Creativity at Rialto Theatre 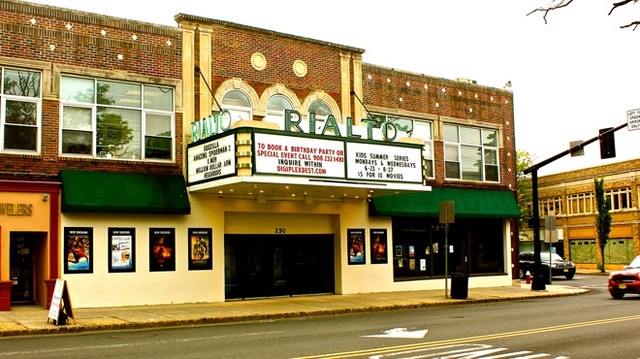 Helped rejuvinate downtown development in Westfield, NJ. The town was awarded the 2004 Great American Main Street Award. The Rialto Theatre was opened September 1, 1922 with Richard Barthelmess in “Sonny” and Buster Keaton in “Cops”. It was badly damaged in a fire in 1931. It was rebuilt and reopened on November 12, 1931.

It was announced in October 2021 that the Rialto Theatre would reopen as a non-profit.

Actually, United Artists Purchased The Rialto Way Before 1997. It Has To Be Like Between 1966 And 1967. According To A Video Called “Hey Folks, Its Intermission Time Vol. 4” One Of The Snipes Said “Season’s Greetings From UA Rialto Theatre,” And The Snipes Are Located Also In Westfield.

This theater has been closed.

A local article on the closing, which cites CT for historic information used, can be read here.

Well that didn’t take long. The theatre in Cranford that New Vision was leasing closed on Wed the 4th. Same issue as this theatre.

The Rialto was in the next town over from where I lived. Saw many films there, The Sting, Earthquake, American Graffiti, Rollercoaster, Smokey and the Bandit and of course the big one, Jaws. Very nice old style theater with a balcony. The box office had a small cabinet where reserve tickets were stored when the reserve seat policy was in place, probably in the 30’s and 40’s. It wasn’t the same after they split it into a multiplex.

Just added 3 news articles about 1931 fire that destroyed the theatre. I always heard about it, but didn’t realize it was that bad. It took 6 months to rebuild from May 22 to Nov 12, 1931!

Rialto will reopen as a non profit.

From the Center For Creativity at the Rialto Website:

A newly-formed New Jersey non-profit organization, the Westfield Arts Collective, announced today that it has signed an agreement to purchase the Rialto building in downtown Westfield.

The announcement comes ahead of the closing weekend of Complements, an art exhibit being presented in the newly renovated lobby of the Rialto. The exhibit features original Charles Addams art alongside art from multimedia artist Suzanne Heilmann.

“We are excited that so many people have stopped by the Rialto to see the exhibit, with many expressing interest in the building’s future,” said Beth Cassie, President of the Westfield Arts Collective. “We are proud to announce the Center for Creativity at the Rialto, a community gathering space for creating, experiencing, and enjoying art in many forms. Our vision is to build a creative hub in downtown Westfield where makers, artists, actors, writers, and musicians of all ages and experience can connect, create, learn, and build community. Westfield is a town of artists, and preserving the iconic Rialto is the best way to ensure that the arts have a permanent place to thrive in our community.”

The Tee and Charles Addams Foundation (https://charlesaddams.com) has generously provided initial seed capital for this effort and has committed to underwriting future art endeavors, with the intention of eventually endowing the Center with Addams works and funding in perpetuity.

“It has brought the Foundation such joy to witness how this community has embraced AddamsFest, annually celebrating the life and work of Charles Addams including not only the iconic and timeless Addams Family, but also his classic work as an artist, New Yorker cartoonist, and as a fixture in the prominent New York social circles of the 1960’s,” said Kevin Miserocchi, Executive Director of the Tee and Charles Addams Foundation. “We’re thrilled that Charlie will return to the hometown that inspired his work and that his legacy will live on through the many artists that will benefit from the Center for Creativity at the Rialto.”

“We are also thankful to the current owners of the building, Jesse and Doreen Sayegh, who have been true partners in the negotiation of this purchase,” added Cassie. “None of this would have been possible without their generosity and shared vision to retain this historic building and keep the arts alive in Westfield.”

The initial phase of the project includes renovating the lobby and restoring one large theater. The lobby will host small gatherings, including author and poetry readings. Once restored, the main floor theater will be made available for film screenings, live performances, and other programs and presentations.

Subsequent phases will include planning for the additional five theaters and office space and will involve gathering public input.

“There is still much work to be done, but we’re thrilled to have started with the lobby, which will remain available as a rotating gallery,” said Westfield Arts Collective board member Margaret Smith. “We’ll begin rolling out our vision for a re-imagined Rialto over the next few months, and we are excited to invite the Westfield community to learn more and get involved.”

John Rzeznik, Westfield resident and guitarist and frontman of the Goo Goo Dolls, announced his support for the project.

“As a Westfield local, it is an honor to be working with my fellow residents to bring a permanent home for the arts to Westfield,” said Rzeznik. “I have offered my name and platform to raise money for this very cool project and hope others will do the same.”

“I congratulate the Westfield Arts Collective on this historic accomplishment and thank the Tee and Charles Addams Foundation and current Rialto owner Jesse Sayegh for being strong community partners in this bold and imaginative effort,” said Westfield Mayor Shelley Brindle. “This effort brings us a giant step closer to our goal of making Westfield a regional destination for arts and culture.”

“The vision for AddamsFest, which included annual exhibits of Charles Addams work, was to honor a local celebrity and infuse the arts into Westfield’s culture,” said Westfield Councilwoman Dawn Mackey, Chairperson of AddamsFest. “I’m so happy that AddamsFest could be the catalyst for the relationship with the Tee and Charles Addams Foundation which ultimately led to this project.”

The public is invited to attend a ribbon cutting for the Center for Creativity at the Rialto on Thursday, October 28, at 5:00 pm.