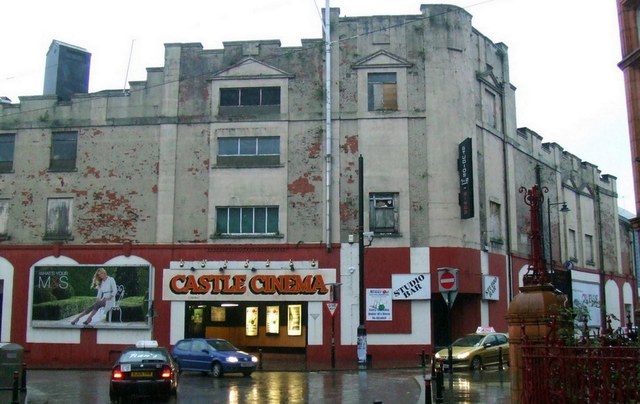 The Castle Cinema, Merthyr Tydfil, South Wales opened on the 11th February 1929, the architect O.P. Bevan based in Merthyr Tydfil, and was built by local contractor G. Warlow of Merthyr Tydfil. The stage was 12ft deep, the proscenium 22ft wide and there were two dressing rooms and the cinema boasted a cafe.

The cinema was built on the site of the original Castle Hotel which was demolished in the mid-1920s for the construction of the New Castle Super Cinema.

The seating capacity at the time was 2,500 in stalls, balcony and a second balcony. Originally, the cinema was not powered by the public electricity supply and had a pair of gas engines in the basement. The Castle also had installed one of the finest organs in Wales, a Christie 3Manual/10Rank organ which was heard on many broadcasts were made on radio during the 1930’s and 1940’s. The organ was opened by organist Gwilym Jones. Sadly it fell into disrepair in the late-1940’s and was removed in 1954.

Ownership of the Castle Cinema passed to Associated British Cinemas(ABC) in November 1932 and was renamed Castle Super Cinema circa 1963, still seating a vast 1,696 seats. Pop concerts were occasionaly staged, one being by Pink Floyd in 1967 and another by the group Samm Faces. In 1972 control passed to the Leeds based Star Group, converting the stalls area into a bingo hall, and constructing two studio cinemas in the balcony, seating 195 and 98, both were by means of periscope mirror projection with Westar Projectors and long play towers. The projection room being constructed from the second balcony level high in the original building, making it a nightmare journey for any projectionst to carry films up and down.

From 1977 the cinemas passed to a series of independant operators, and when bingo ceased in 1998, the former stalls area was reseated and a giant 45 foot screen placed in front of the original stage area, with luxury seating for 300, this new Screen 1 opening in June 1999 with “The Mummy”. The two other screens also remained in operation.

After the opening of a 12 screen multiplex ten miles from the town, and the high costs in maintaining such an old and rambling building, the cinema finally closed in September 2003. The building degenerated into a delapidated state and is unlikely to be used for presentation of films again. It was converted into a skating rink, a venture which soon failed and the building became a pub. The former Castle Cinema was demolished in January 2011.

hi
has there been any further news of this building since this posting?
Thanks
jon

It was converted into a skating rink, but that venture failed and it is now in use as a pub.

When it first opened in 1929 it was known as the Castle Super Cinema and had a seating capacity of 1,696.