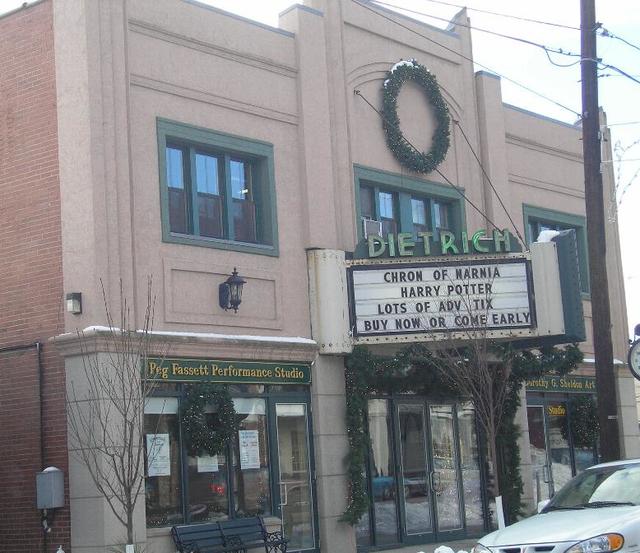 The Dietrich Theater was built in 1936 by George Dietrich and continued to show movies for nearly fifty years. In the late-1980’s, the local theater could no longer compete with the mall movies, and the twin screen theater became dark. In 1998, concerned citizens purchased the theater. The theater reopened on April 13, 2001, and later three more screens were added that were designed by architectural firm JKR Partners.

The Dietrich Theatre has been expanded, adding two new screens. The new auditoriums and other alterations were designed by the Philadelphia architectural firm JKR Partners, which features a few words about the theater and one small photo on this page of its web site.

Not much here about the Dietrich Theater. Who are these people anyway, TC? I guess they’re the concerned citizens? All we need now is the rest of the story!

JKR Partners is now called JKRP Architects (the firm was founded in 1984 as J.K. Roller Architects.) While several cinema projects are featured on their redesigned web site, the Dietrich Theatre is unfortunately not among them.

The photo currently on display was uploaded by wsasser back in 2012, but he didn’t provide any annotation with it. As the newest movie on the marquee, The Mummy Returns, was released in 2001, I’d surmise that the photo was taken around the time the house reopened that year, and the people depicted were connected in some way with the event.