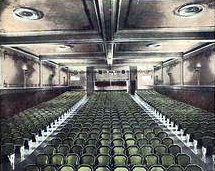 The West Cinema, also called the West Cinema 1 & 2, is a merging of two small next-door movie houses, which originally dated to the 1920’s, the 644 seat West Theater and the 607 seat Colonial Theater which had closed down in 1952.

The West Cinema and the Sandburg Mall Cinema, both part of the Kerasotes chain, were both closed on December 19, 2003 when Kerasotes opened their new Showplace 8, not far from the Sandburg Mall. The West Twin Cinemas was demolished in May 2019.

Having lived in Galesburg most of my life and being an avid movie-goer, I heard many times that the West Cinema 1 & 2 was haunted by a woman in a white dress who would walk through the second part of the theater (the Colonial?) at 11:30. It was corraborated by the manager at one point, who told me that he and several employees had seen her. Take it for what you you will. A fun story, if nothing else.

I’m really sorry to hear that the West has closed. Ever since they resurrected the Colonial (closed about 20 years) to twin with the West in the ‘70’s, I bragged that my old hometown was possibly the only place of its size which had preserved 3 of the 4 downtown movie houses they had post-World War II. From what I remember of the Colonial as it looked in the '40’s & '50’s, I would say it went back further than 1920.

The West Cinema building has a new owner. The Register Mail article dated April 14, 2017 is here.

These neighboring theaters lasted over 100 years in downtown Galesburg. Their origins date back to at least 1910 and were operated by the same management at that time. A similar twin concept was found in Decatur, Illinois with the same company and theatre names. The Galesburg property had previously been home to a hook and ladder fire company building dating back at least to the 1870s.

The hook and ladder building was replaced by the Colonial and Colonnade theaters. Both Prairie Street theaters got new owners in 1913 and were given major makeovers if not entirely rebuilt the following year. Under the operation of Lafayette “Lafe” Weinberg, the Colonial expanded from 300 seats becoming a 44'x100', 700-seat theatre with a 16'x20' screen launching November 1, 1914 with a marble lobby and new auditorium. The theatre became part of the Publix Great States Theatres Circuit in 1922 along with the West Theatre and the nearby Orpheum Theatre.

Publix Great States agreed to close the Colonial in 1951 with equipment offered for sale after a forced sale under the Paramount decree. In 1954, the former Colonial was used as a church. It also had a long period of vacancy until resurrected by the Kerasotes Circuit.

The neighboring Colonnade Theatre was purchased by Willard J. West in 1913 and renamed the West Theatre expanding its seating to 800 and was supposed to have opened three weeks after the launch of the Colonial in November of 1914. The West Theatre appears to have actually debuted early in 1915 under the slogan, “House of Quality.” It had a Bartola played by Alma Burgman of Fort Madison, Iowa. On the second floor was the West Ball Room for dancing which appears to have lasted 20 years. As the building was headed for demolition in 2019, a video shot showed the piano still housed in the long-abandoned ballroom. As noted, Publix Great States Theatres took on the West Theatre and updated its look including a new foyer and concession stand in 1959.

Kerasotes took on the West Theatre as well as the Orpheum on December 28, 1972 as ABC Great States left Galesburg after operating the West for 50 years. The theater received a new front in 1974. In 1982, Kerasotes Circuit decided that two twin-screen operations were superior to single-screeners. Kerasotes had taken on the West Theatre’s neighbor, the Colonial, creating the West Twin Cinemas from the former Colonnade/present West and the moribund Colonial. Kerasotes had already discontinued the single-screen Galesburg drive-in and shuttered the high-visibility Orpheum Theatre in 1982 in favor of the West Twin. The Circuit would build an addition to the Sandburg Mall in 1982 that brought about a brand new twin screen theater in that mall.

The West Twin Cinema and the Sandburg Mall Cinema were both closed on December 18, 2003 when Kerasotes Circuit opened their new Showplace 8 multiplex, not far from the Sandburg Mall a day later on December 19, 2003. The West closed with little fanfare despite being opened for more than 90 years. And the building got one more chance. In 2017, AMC – which inherited the Colonial-Colonnade / West Twin property in 2010 when it bought out the Kerasotes Circuit – sold the historic theatres to a local businessman for $100.

However, the 100-plus year old’s building condition was poorer than anticipated and the building was donated to the city of Galesburg in June of 2018. On January 7, 2019, the City Council approved a bid to demolish the historic theatres to create a green space.