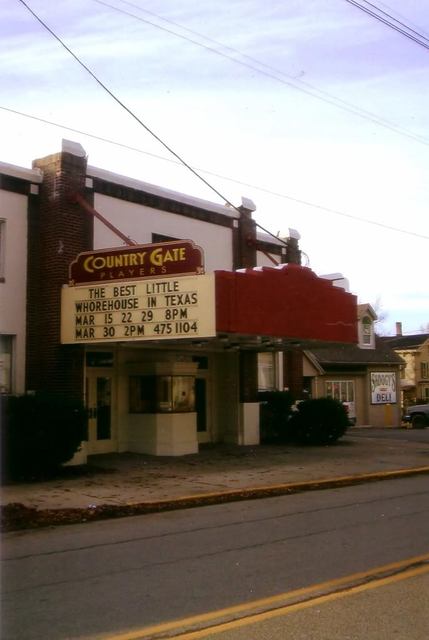 Old photo on this link:

Probably from 1938, from the titles on the marquee.

That is one cool picture, I used to hang out on Front Street which is around the corner. I bet it looked cool lit up at night.

In a sense, Chelsea and Gina Scurato learned to walk in the theater, according to their father, Bill Scurato of Harmony.

The twin girls were born in September 1976. In June 1977, Scurato and his wife, Carolyn, took over the Belvidere Movie Theater at 114 Greenwich St. The Scuratos planned to transform the then- abandoned movie house into a home for Country Gate Players, the community theater company they had founded in 1970.

‘'We were scrambling to get the theater ready, plus rehearse 'Camelot’ for production that December,“ recalled Bill Scurato. "That was an incredible undertaking, and here we had two little girls. They were really finding their first steps during that first year in the theater.” Twenty-three years later, Country Gate Players Inc. is still a family affair. Bill Scurato continues to direct or act in most of the shows. Gina Scurato of Harmony heads the theater’s summer Young Actors Workshops. She also performs and sometimes directs productions with adults. Chelsea Scurato of Phillipsburg mainly handles the box office and financial aspects of running the company.

But to Bill Scurato, many of the performers who have taken the stage at Country Gate also are extended family. He noted, for example, that the company’s first show – “Never Too Late,” produced in 1970 at Warren Hills Regional High School – featured Sal Marchello of White Township, who has since appeared in numerous Country Gate productions over the past 30 years. Dave Miller of Easton, Pa., the theater’s chief set designer, appeared as a youth in such shows as “The Music Man” and “Oliver,” acting alongside his father, James Miller of Washington Borough.

When Carolyn Scurato died of cancer in 1998, these people and other members of the company “gave us so much support,” Chelsea Scurato recalled. “That was a difficult time. It was hard for the first couple of shows to come to the theater, but it became a way to stay connected to her.”

‘'Carolyn was really the inspiration for the whole thing,“ said Bill Scurato. "She rarely took credit for anything. Her loss has been an incredible void, but the girls have really stepped up to the plate.”

Bill and Carolyn Scurato first came up with the idea of forming their own company after they met as students at West Liberty State College in West Virginia, where they were both theater majors. “We both loved theater, and we thought that getting involved in community theater was the thing to do,” he said.

After the Scuratos married and moved to Warren County, they began staging plays at Warren Hills Regional High School in Washington Township with help from the Central Warren Youth Association. (Bill Scurato is the school’s supervisor of curriculum and instruction.)

‘'It was a challenge at first, because we would rehearse in elementary schools or high schools – anywhere we could find a space,“ Bill Scurato said. After an unsuccessful attempt to purchase an abandoned railroad station in Washington Borough, the Scuratos learned they could lease the Belvidere Movie Theater, which had shown both legitimate and X-rated films in its checkered past.

‘'We made so many mistakes at first,“ Scurato said with a laugh. "That first year, we burned about $10,000 worth of heating oil.”

However, he said, the theater also received grass-roots support over the years, including a contribution of $10,000 from the Warren County Board of Freeholders that enabled the Scuratos to purchase the movie house. Howard Ott of Belvidere, a licensed electrician and plumber, volunteered his services in many capacities over the years, Scurato said.

The second generation of Scuratos took the stage at Country Gate in the mid-1980s, when Chelsea appeared in “Annie.” “Gina wasn’t in that show, but she was at all the rehearsals. I think that gave her the itch,” said Bill Scurato. Though Chelsea Scurato appeared in other roles (including Helen Keller in “The Miracle Worker” in 1989), Gina Scurato has become much more active on stage in recent years, taking featured or starring roles in “Godspell,” “Nunsense,” and “Funny Girl,” among others.

Earlier this year, the family had a role reversal, when the daughters co-directed their father as Willy Loman in “Death of a Salesman.” “That was tough,” said Bill Scurato. “Sometimes I thought they were harder on me than on anyone else. But they went into it with the attitude that this was a serious undertaking.”

He commented, “I never tried to pressure the girls to be in the theater. We always hoped that they would see the value of Country Gate, but we never pushed it on them.”

Both the Scurato daughters have jobs outside the theater: Chelsea Scurato is an adolescent counselor at Warren Hospital Alcohol/Drug Recovery Center in Phillipsburg, and Gina Scurato is a special services teacher’s aide at Warren Hills Regional High School.

But they also emphasize their affection for the theater. “I’ve never pictured my life without it,” said Chelsea Scurato. “It’s been such a big part of my life.” Though she is engaged to Greg Snyder of Cumberland, Md., and will move to Maryland next year, she still intends to attend at least one performance of each Country Gate production.

‘'I want Country Gate to be what my mom and dad envisioned when they started the group,“ said Gina Scurato. "We’re a family here. I feel that my mother will always be here at the theater. When I’m on stage, I’m thinking that she’s still out there, seeing me.”

‘'The girls have taken a very mature and responsible approach to the theater,“ Bill Scurato concluded. "They’re only 23, but they do it truly for the art and for the community. And we have so many other talented and dedicated people. The future of Country Gate is with them.”

“The town also has a vibrant community theater, Country Gate Playhouse (908/475-1104), that offers a schedule of performances plus youth-oriented productions and workshops in a former movie theater built in 1939.” njskylands.com

This information would indicate that the photo in my post of 1/25/05 might be the opening day or shortly after opening.

Was formerly owned by Alvin Sloan from the 1930s to the 1970s. Check out my last post from the Washington Theatre at /theaters/6644/