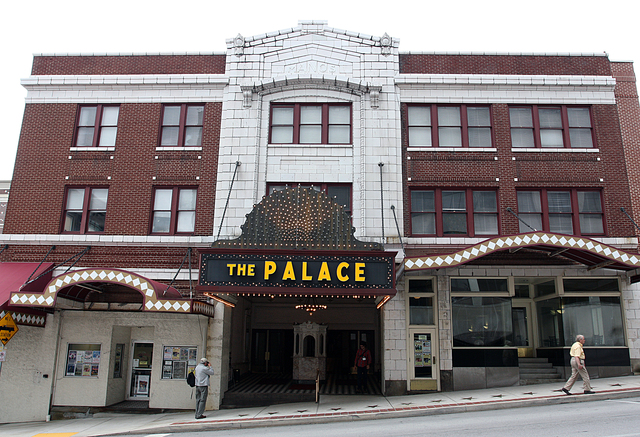 Opened September 2, 1926, as the Manos Theatre, it was built in a Neo-Renaissance style, complete with marble imported from Greece for the lobby walls, murals in the main auditorium, decorative plasterwork and elegant crystal chandeliers. By 1941, the Manos Theatre was operated by Warner Bros. Circuit Management Corp.

After a long life as a movie house, the Manos Theatre was reopened in 1991 as the Palace Theatre Center for the Performing Arts and has been in the midst of a three phase restoration project which will bring the theater back to its original beauty.

The Palace Theatre is noteworthy for its gorgeous lightbulb-lit marquee, with a sunrise motif, and the theater’s name in blazing neon underneath.

Since its reopening, the Palace Theatre has hosted perfomances by celebrities from Bill Cosby to Bernadette Peters on its stage, and also is home to local organizations like the Greensburg Civic Theater, the Laurel Ballet, and the Westmoreland County Choral Society.

The Manos Theatre was closed without notice by Cinemette Theatres in June of 1977. The next day, Cinemette opened Cinemas IV in Westmoreland Mall

Today, Greengate mall Cinemas, Cinema World – Eastgate Plaza, Cinemas IV – Westmoreland Mall, Laurel 30 in Latrobe, and the Rustic Drive-in have all closed. The only remaining movie theatre is the Carmike 15 in Westmoreland Mall.

I just saw Tesla here the other night. Nice theater, needs some renovating and TLC, but nice.

I wish Pittsburgh had a decwent concert hall like this.

The Rialto Theatre preceded the Manos Theatre on that corner, possibly the same building refaced with the above mentioned marble. A circular corner section was removed and squared off. Two photos presumably from the early teens added shwoinf the previous structure. It appears a large auditorium is under construction in one of them.

Their history link does not mention the Rialto, yet their link has a photo of it as the header, with the Strand next door.