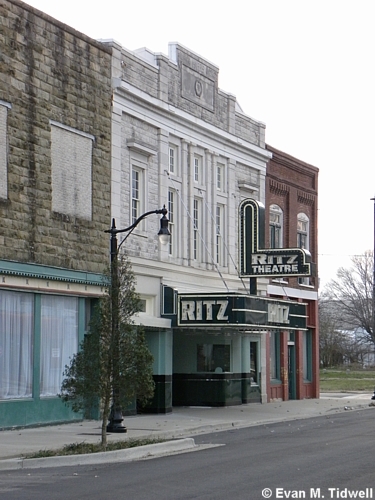 Built as a playhouse, the Ritz Theatre was opened on July 9, 1928 with a production of “Gentlemen Prefer Blonds”. Louis Rosenbaum was the district manager of Muscle Shoals Theatre, the company that owned the theatre, and C.J. Ross was the first manager of the Ritz Theatre. The Ritz Theatre had a seating capacity of 408 downstairs, 173 in the ‘white’ balcony and 101 in the ‘colored’ balcony, a total of 682 seats. The theatre had a Wurlitzer organ. It was refitted in 1933 to accomodate talkies and to undergo a sleek Art Deco style makeover. On Saturday January 23, 1933, the theatre had another ‘Grand Opening’ when President Roosevelt visited Florence that day. By 1941 Muscle Shoals Theatres was a subsidiary of the Nashville TN. based Crescent Amusement Co.

The Ritz Theatre remained one of Sheffield’s most popular movie houses until it went out of business on June 9, 1951.

In 1985, the Ritz Theatre was purchased by the Tennesse Valley Arts Association, and restored to its 1930’s appearance, complete with its unusual auditorium side wall decoration, resembling giant fans.

The Ritz Theatre is now home to the Center Stage Community Theater, which performs both classic and contemporary plays in the setting of a classic small town movie house.

Both those photos are of the interior and identical.

A 1986 view of the Ritz in Sheffield here and here.

The 1947 IMPA shows the Rosenbaum Theatres chain as headquartered in Florence, AL. President was Louis Rosenbaum. This chain ran the Colbert and Ritz in Sheffield as well as a few other theaters in Alabama.

Sorry, slight mistake on my part-that information is from the 1958 IMPA.

“Neoclassical” should be added to the styles list, since that’s pretty much the top two-thirds of the facade. Only the lower third is Art Deco, due to a renovation in the 30’s.

The building says Harris at the top, over the date 1927. Any idea if he was the investor who built the theater?