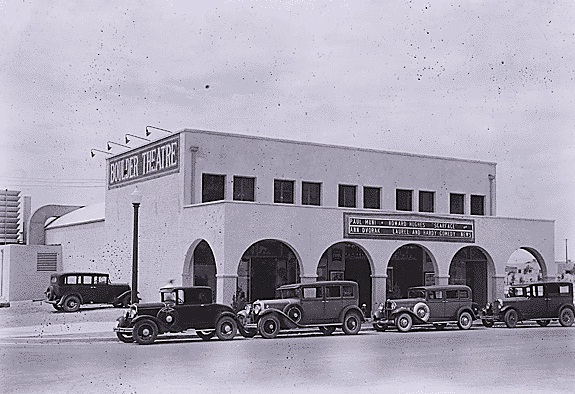 The Boulder Theatre opened in 1932 seating 550. For years it was the only air conditioned building in the quaint town of Boulder City. It remained in operation as a movie house until 1999 when it was purchased by Desi Arnaz, Jr. The theatre has been completely transformed into a live venue for the Boulder City Ballet.

Chuck: Please email your photos of the Boulder Theatre as I just received word from a fellow Lucy Festival volunteer that Desi Arnaz, Jr. purchased this theatre so now I’m very interested to learn more!

I have a real love/hate relationship with this Mayberry of a theatre.
I lived in Boulder City, Nv thru my final 3 yrs of high school (Boulder High, natch!). Now, you gotta realize, downtown Boulder consisted of maybe 4 blocks. Main St (and it really was called Main Street) was 2 of those blocks. The Boulder theatre was set dead center facing the lone town drugstore across the street. The bowling alley (8 lanes!) was THE hot hangout for the teen crowd. Woo hoo.
Needless to say, Saturday nights were fairly busy at this singular flicker palace. Didn’t matter that the Boulder Theatre ran, not 2nd run movies, but 3RD RUN titles. Movies that had played in nearby Las Vegas (24 miles away) 8,9, 10 MONTHS ago!
I moved there from the D.C. area in 1977. Close Encounters of the Third Kind had its Boulder premiere in the fall of 1978! (FYI: CEOT3K was released Dec of 77.)
Anyway, beggars can’t be choosy. My first high school girlfriend worked there. The owners were an old, grumpy couple. Didn’t see them much. But, she would get me in free. Slip me some popcorn. Sneak in to join me in the back row when the concession stand was slow. Hickeys and cop feels galore.
Even better, she was a film junkies' dealer for original movie posters! Damn, I loved her. Started a huge collection of one sheets:
Star Trek the Motion Picture, Superman, Scanners, The Wall….on and on.
Well, to the hate part:
Part of the joy I get out of films is sharing good movies I know with friends and watching their reaction. One Saturday night at the Boulder, they were showing Sliver Streak. Now, Silver Streak came out in 1976. I had seen it about 6 times. Loved the train crash thru Central Station at the end. So, I took 3 of my buds who hadn’t seen it. The theatre was nearly full. The print being shown was baaaaad. Scratchy, dirty, several breaks/splices in the much passed around print. Oh, well…no cable, pre-Blockbuster era. Whatcha gonna do?
Well……..
things settle down, movie gets to it’s big climax, train barreling toward the end… music pumping…tension…wait for it…
“Click, scatch, blip, splice!"
End credits roll.
NOOOOOOOOOOOOOOOOOOOOOOOOOOOOOOOOOOOO!!!!
The whole climax had been long ago spliced out of the print.
Worst yet, the theatre owner knew it, but ran the week long engagement anyway. You think a woman’s scorn is hell? You should have seen me! Oh, I was pissssssssssssed!
I imagined a lobby riot; torch weilding villagers demanding their $3 refunded. Lori, my girlfriend, said the manager (owner) left early.
No shit. I refused to speak to her for a week after that.
Well, that particular memory will torment my movieloving soul till I die.

I was in Boulder City a few years ago. I seem to recall that it’s the only city in Nevada that doesn’t have legalized gambling. If I’m wrong, let me know.

It’s the same building in both photos.

It is the same theatre, same building. They did add another section to the right of the theatre. Don’t know when. Was a hardware store when I was living there circa 1980.
The metal gate is new. There was none when I attended shows there. Fancy embellishment, or high crime area?

Desi & I purchased the Boulder Theatre in Boulder City NV in 1998 after it went out-of-business as a movie theatre. It couldn’t compete with the beautiful, new cineplexes over the hill in Las Vegas. It sat closed for over a year and finally we decided to buy it and make it home to non-profit Boulder City Ballet Company. Desi transformed the interior — keeping it in the 30’s style — but lifting it completely to code with new plumbing, electrical, fire alarm, sprinklers, asbestos abatement, 8 AC units, new roof, etc. He took down the screen (we still have it!) and extended the mini-stage to a 40x40 stage complete with Harlequin flooring and a custom build trusse system. We have a full lighting rig and recording studio. There are lots of great Boulder Theatre photos on my blog at: www.TheMagicTutu.typepad.com and more info and more photos on the website of the Boulder City Chamber of Commerce at: www.BoulderCityChamber.com/bouldertheatre
I love all the photos others have posted here. Thank you! Once the photo submission option is once again activated on the site I will post some very recent photos of our theatre. We still have the original projectors from the 30’s and they still work!
Amy Arnaz

The California Index contains a card citing an item in the December 11, 1931, issue of Southwest Builder & Contractor saying that architect Clifford Balch was preparing the plans for a theater at Boulder City for Fox West Coast Theatres.

According to this page at the Boulder City Ballet Company’s web site, the Boulder was built in 1932 for Fox Theatres. I think we can add the Boulder Theatre to the list of Balch-designed theaters.

I took a picture of the theater when I visited Boulder City in June:
http://www.panoramio.com/photo/27108632